Accessibility links
Make 'Em Laugh: Why No Oscar for Best Comedy? There are some genuinely thrilling moments contained in the five movies nominated this year for a best picture Academy Award. There is not, however, a single sincere laugh, notes Jacob Ganz. He offers the case for a comedy category.

Make 'Em Laugh: Why No Oscar for Best Comedy?

Make 'Em Laugh: Why No Oscar for Best Comedy? 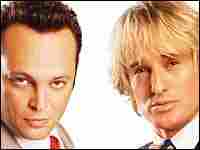 It's time for a new Oscar category.

Much of the talk swirling around this year's Academy Awards has focused on the two characteristics that the nominees for best picture supposedly share: A strong political perspective and independent financing. (That's "independent" -- and "political" -- in the Hollywood definition of the terms, of course.)

For your consideration, I'd like to submit a third: overwhelming humorlessness. Yes, there are some genuinely thrilling moments contained in these five movies. There is not, however, a single sincere laugh.

There are a lot of great comedies out there -- movies with the sole purpose of making people laugh. But the academy doesn't tend to see it that way. Perhaps this year's best movies, the movies that reflect the collective anxiety of an industry coping with lagging box office and shrinking cultural dominance, really do all focus on willful and ultimately solitary characters who struggle with their respective visions of integrity in the face of interference from the larger, and crueler, world.

But all five? Seriously? Borrrrring.

I wish I could call this bout of earnestness a one-year thing. Although the academy has given nominations here and there to a few "laughter through the tears" comic dramas, the group has long shown a perplexing shyness when it comes to recognizing movies that, you know, make people laugh. Annie Hall won best picture in 1977; before that you need to go back 44 years to find It Happened One Night. And if you're an actor with a talent for comedy, forget it -- the academy occasionally throws a nomination to a comic performance, but your chances for a win are virtually nonexistent. (Hello, Marisa Tomei!) Judging from their picks, the academy likes loners, the tormented, the tragically lovelorn. And as for the medically challenged, well, let's just say the academy will nominate people who are afflicted with everything but a sense of humor.

Groundhog Day, There's Something About Mary, Fast Times at Ridgemont High, Airplane!, Dazed and Confused -- classic comedies all, with real and significant things to say about love, sex, personal triumph, and American history. And not a single nomination among the bunch. And there are a slew of others, from A Fish Called Wanda to Big to Best in Show, from Ghostbusters to Blazing Saddles to Animal House, whose few nominations and virtually nonexistent wins are almost always in minor categories. (And we're talking about a fairly large percentage of the movies released each year. The most notable exception, incidentally, is Tom Hanks' best actor nomination for Big.)

It is ironic that the academy doesn't recognize comedy. Think of Oscar as an animal (an overfed, self-absorbed, extremely well-dressed animal) motivated by two instincts: an appreciation for the finely crafted, delicate artifacts of quality filmmaking; and a lust for cold, hard cash. An award for best comedy gives Oscar's preening half the opportunity to recognize profound, well-crafted, seriously funny films that will go down as classics not just of the genre, but of the form.

And that love of coin? Well, with films people have actually seen and enjoyed nominated in a major category, perhaps the awards show will attract viewers who might not care to see Paul Haggis pontificate on the state of race relations amongst narcissistic Angelinos, but would tune in to see whether the Farrelly Brothers, Christopher Guest, or Alyson Hannigan take home a statue. If the only movies you've seen this year are those five dour flicks nominated for best picture, you should know that these viewers have a name: teenagers. Advertisers like teenagers. Oscar loves advertisers.

Tell me how this match is made somewhere other than heaven.

You're skeptical. I understand. You're wondering, "Are there even five comedies made in given year that are worth nominating?" Well, let's take a look at 2005.

Given the academy's stodgier tendencies, figure on a nomination for something like The Producers. But add in critically acclaimed box-office winners The Wedding Crashers and The 40-Year-Old Virgin and figure that one or two deserving underdogs such as The Squid and the Whale or the highbrow gross-out documentary The Aristocrats sneak in, and you've got a category worth watching.

Some will object. Academy purists will no doubt whine about the dilution of Oscar's integrity. "What are we, the Golden Globes?" they will say.

For their part, fans of comedy could complain that their genre is being ghettoized. But like others before them (notably the animation folks, who were segmented into their own category in 2001), they will learn to live with changes in the Oscar firmament.

The only real potential problem stems from Hollywood's seemingly unending ability to make blandly predictable films in pursuit of awards. There's always the possibility that studios will simply come up with a new formula for "Oscar-worthy comedies," with big stars squeezing out tears between half-funny punch lines. We will call this the Patch Adams perplex. My solution: Create a "comedy branch" and let comedy screenwriters make the nominations, just as the other branches put forth their nominees.

But I'll hold out hope. Sure, serious, tiny, angsty films are great, but in a best-case scenario, an appreciation for comedy bleeds into the rest of voting, and the academy nominates Bill Murray for a performance where he doesn't just stand around looking sullen.

Can we greenlight this baby?

Read the previous story in this series, Why I'll TiVo the Oscars.

The Nominees Could Have Been: