Accessibility links
Carnival in Rio: A Party Like No Other As Mardi Gras revelers struggled to lift the battered spirits of New Orleans, Rio de Janeiro secured its reputation as the most decadent place to be for Carnival. Julie McCarthy provides a glimpse into the festival's unparalleled glitz and glitter. 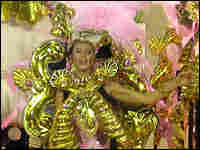 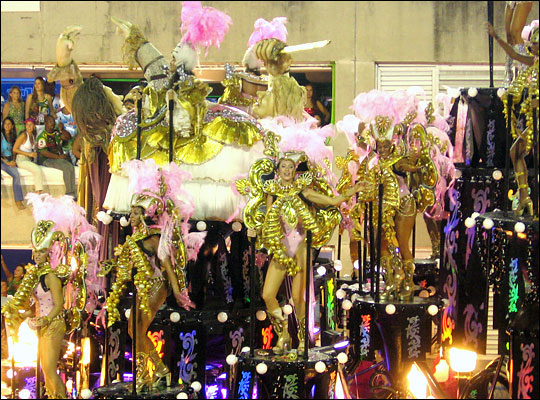 All that glitters: Carnival paraders in Rio de Janeiro's Sambadome. 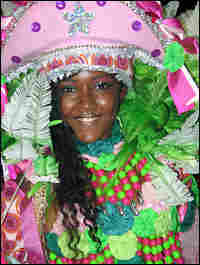 One of the many faces of Carnival. Julie McCarthy, NPR hide caption 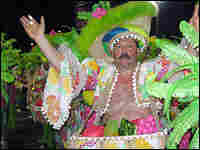 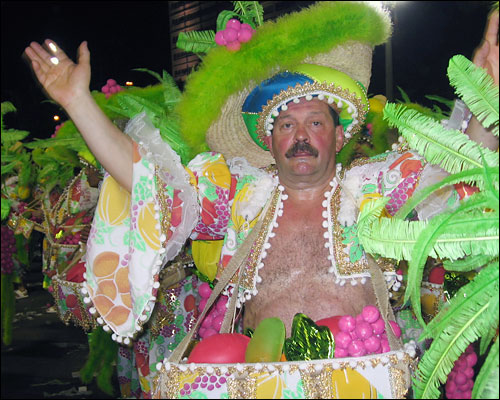 Fruits of one man's labor: Another festive Carnival participant.

As Mardi Gras revelers struggled to lift the battered spirits of New Orleans, Rio de Janeiro secured its reputation as the most decadent place to be for Carnival. About 200,000 spectators sat in thrall watching dancing beauties shimmy, shake and samba until dawn three nights running at the stadium that bears the name Sambadrome.

To the uninitiated, the world's most scantily clad street party can be intimidating. For starters, women in Brazil appear to have bodies unblemished by the ravages that plague the rest of us lesser, paler mortals. What's in the water? Secret anti-cellulite algae?

The goddesses of Carnival reign over a half-mile-long concrete runway that makes up the parade ground in a spectacle that veterans say gets more risque every year. Who needs a costume when a little glue and glitter can cover those no-show zones?

In the words of one nearly nude television host of a show for barely clad glitterati: "I'm happy to shed that 22-pound costume of Carnivals passed." Never mind that her towering headdress likely weighed every ounce of that.

But women weren't just ogled this week. One of the top samba troupes dedicated its entire parade to the virtues of all Brazilian women: Sprawled out on a float was a naked (of course) mother-to-be, seductively rubbing her belly to the musical refrain: "Indian, black, white -- it's all seduction."

A week after Mick Jagger wowed a million-strong audience with a beach concert in Copacabana, his ex-girlfriend -- and mother of his son -- strutted her stuff. Luciana Gimenez was a six-foot vision in green plumes, prancing ahead of the drum section of the popular samba school Imperatriz Leopoldinense.

Inside a box set up by corporate sponsors, paparazzi buzzed around her like flies.

The lucky elite in the corporate suites had one thing many spectators in the stadium coveted: a bathroom. Facilities were in such short supply that organizers distributed small packets labeled the "ultimate protection." The package contained a "feminine urinary conductor," a piece of pink paper folded into a cone, which, when strategically placed, allows women to urinate standing up. An enterprising vendor covered a street drain with plastic sheeting and charged one real (50 cents) for the privilege of the privacy.

One of the leading samba troupes, meanwhile, used its program to ask: "Does money buy happiness?" It might have this week, when rain lashed the Sambadrome. Well-heeled spectators ran for cover in party rooms where an army of waiters balanced trays of liquor and local delicacies. Guests in the bleachers sat out the storm, soaked.

But the rain didn't dampen the enthusiasm of Roop and Ajay Vonkarey, a couple from New Jersey determined to be in the parade. I fell into conversation with them on the subway heading to the Sambadrome when Roop noticed "NPR" on my press credentials.

The two had squeezed themselves and their bulky costumes onto the train packed with hundreds of other parade-goers. Riding the compartment full of harlequins, fairies and assorted fur-balls, I felt like Alice falling through the looking glass.

The Vonkareys hadn't yet tried their costumes on and weren't even quite sure who they were supposed to be.

"No, we're not," Roop shot back, "we're indigenous Indians."

Unresolved, we moved on. "What's your troupe's theme?" I asked. They exchanged slightly worried looks.

I whipped out the guide of the League of Samba Schools, flipped to Beija-Flor, their group (reigning champions), and read: "'From initial Chaos to the explosion of Life, Water, the Mother-ship of Existence!' Wow! You guys are the Big Bang," I exclaimed.

Roop's big brown eyes widened as she leaned in for a look. "'Mother-ship of Existence,'" she muttered. "Intense."

But not as intense as the price tag for this outing: The couple had plunked down more than $700 for the privilege to march in the parade.

"I've been planning to visit Brazil for the longest time," said 31-year-old Roop. "Maybe I'll sacrifice that Prada purse so I can do this. It's a once-in-a-lifetime thing," she laughed.

The politics didn't stop there: The world-famous Manguiera school, who eschewed nudity for resplendent costumes, performed a tribute to the Sao Francisco River, the subject of an intense irrigation dispute.

The program that affirmed the glories of Latin America was a showstopper that would have made Venezuelan President Hugo Chavez proud. Venezuela's state-owned oil company helped fund the Vila Isabel samba group that performed the show -- and was bestowed with this year's prestigious samba championship.

But the crowd darling was samba singing legend Jose Bispo Clementino dos Santos, who's known as "Jamelao." The 93-year-old crooner defied ill health to belt out an entire 90-minute program.

From his perch in a box seat, Brazilian soccer great Romario de Souza Farias summed up the event: "Carnival means the union of all the different people, and all the different races," he said. "It's one of the few times that Rio is really happy."

One of Carnival's happier street parties has traditionally been held in Ipanema, where gay men dress as women and entertain revelers just by standing around. A crowd favorite this year -- two men dressed in blinking banana headdresses and platform shoes -- went by the names "Carmen" and "Miranda."

Carnival ended this Ash Wednesday. Tourists leave behind the splendor of Rio's beaches, and until next year, bleary-eyed Brazilians put away their fantasies -- of being kings and drag queens.