Accessibility links
New Orleans' Friendliest? Cops are normally authority figures. But this Mardi Gras week, members of the New Orleans Police Department managed to be affable and authoritative. Their first mission, of course, was crowd control and safety. 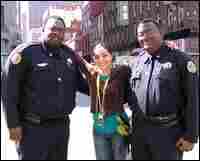 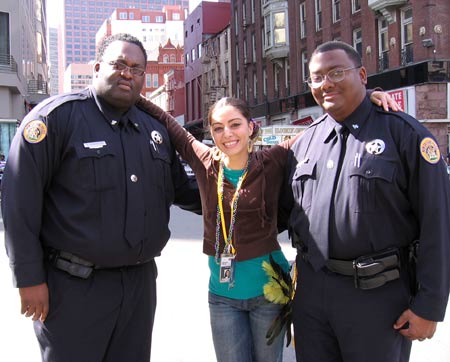 Cops are normally authority figures. But this Mardi Gras week, members of the New Orleans Police Department managed to be affable and authoritative. Their first mission, of course, was crowd control and safety. One officer I chatted with told me he was pretty pleased with the way things went this week:

"The crowds aren't as big as usual, but they're pretty good sized. And they're well-behaved. Which is a good thing, because we don't want anyone ending up in the emergency room this week if we can help it. E.R.'s -- what's left of them -- are already filled to capacity."

Perhaps because of that, police and their auxiliary officers from Immigration and Customs Enforcement were gratifyingly cooperative. (Their acronym, ICE, is prominently stamped on their long black sleeves. Goes with their cargo pants and lace up boots. Ninja couture…) They were picking up the throws and other items tossed from floats to the crowds.

The wide safety barrier meant the throws sometimes missed their intended recipients. I was first amazed, then amused, to see big guys with guns on their hips stoop down on the street to scoop up beads and hand deliver them to grateful old ladies. After awhile yesterday, the nice officers were being directed to specific beads and trinkets.

"Officer, officer! Can you pleeeeease bring me that spear over there?" a six-year-old said. He was pointing at one of the throws that's a Zulu staple. Other cops served as impromptu photographers ("y'all squeeze in now, so I only have to do this once...") and even escorts when families got separated by parade barriers.

Sometimes, the police even let us take photos of them, as this shot of two of them with NPR producer Shereen Meraji shows.

"Look, bottom line is this," one of them told us. "We want you to have a good time in our town. But we want you to be safe, too."

They were able to accomplish both during this first post-Katrina Mardi Gras.