Accessibility links
Back to the Lean Times for New Orleans This year's Mardi Gras was necessary for New Orleanians to rouse themselves from their post-Katrina funk, says Crescent City resident Chris Rose. But now that the revelry has faded, residents must once again turn to the long, hard task of reclaiming their city, and their heritage.

Back to the Lean Times for New Orleans

Back to the Lean Times for New Orleans 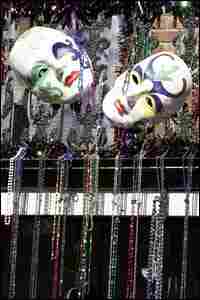 The Party's Over: Decorations and beads hang on a balcony in Bourbon Street in the French Quarter of New Orleans the day after Mardi Gras. Robyn Beck/AFP/Getty Images hide caption

For the hundreds of thousands of residents of the Gulf Coast who chose to celebrate Mardi Gras this year, it was even more of a dream state than usual.

It's always hard to wipe away the post-Carnival cobwebs and the remnants of face paint still stuck under your ears after the weeklong Bacchanal.

Chris Rose is a columnist for The Times-Picayune and a regular contributor to Morning Edition. He is the author of 1 Dead in the Attic, a collection of post-Katrina essays.

It always takes a few days to catch up on unreturned phone calls and e-mails and missed deadlines -- and everything else that piled up while New Orleans partied and, everywhere else, it was just another Tuesday in winter.

This Mardi Gras was nearly a state of grace, as this city pulled itself out of the funk we've been in for six months. We gathered with friends and family and cooked every bit of farm and sea life we could harvest and, for a brief moment, we were able to forget.

A big fear for New Orleanians going into this thing was that folks elsewhere wouldn't "get it," wouldn't understand why we had a Mardi Gras at all considering, well… considering.

But my not-quite-comprehensive review of national media coverage of the event leads me to believe that, for the first time, the Mardi Gras storyline was able to arc past the "t--- and beer" angle of Bourbon Street -- which is all of out-of-towners anyway -- and found its way closer to the heart of what Mardi Gras is and what New Orleans is: a family affair.

And that's one reason we had to go ahead with the celebration. There are already precious few things for children to do here, so many of their museums and destinations still on the mend, so many playgrounds and ball fields now paved and replaced by trailer cities.

So who was going to tell the children of New Orleans: Mardi Gras is cancelled this year because the adults are all depressed?

But when it was over this week, the harsh reality set in. It's more than missed phone calls and piled up laundry that need attending to after the celebration like in years past. This time around, we've got more than plastic beads and beer cans to pick up off the parade routes.

We've got a whole city to rebuild.

I think it settled over all of us over the past few months that our challenge ahead is one that will take years, maybe decades. This is a draining, nearly debilitating realization, made all the more tangible by witnessing how lovely and comic and spirited this place was, is, and still can be.

When we finally took off our masks and purple, green and gold satins this week and packed them away in trunks for next year, it was not with the usual hangovers and lamentations that the rest of the work week was too short to get everything done.

It was with a renewed sense that we've got something special on our hands here. The country's most ethnically and culturally complex community, the place that redefined or flat out invented American cuisine, music, cocktail culture, literature and even poker is now setting about the task of reclaiming our heritage, what we are.

Mardi Gras was a step -- a big step -- in that direction. Now we have buildings and institutions and miles and miles of neighborhoods to bring on board and up to speed.

Instead of toasting imaginary queens and passing out baubles and doubloons in fairyland, all the king's horses and all the king's men now take on the challenge of putting this city back together again.