Accessibility links
Interracial Choir Becomes Lifeline After Katrina Shades of Praise is an interracial gospel choir in New Orleans that has become locally famous as a symbol of racial harmony. The group was a common sight at stages and churches around town. Then came Hurricane Katrina, and suddenly this choir has found itself thrust into a new role. 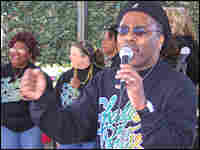 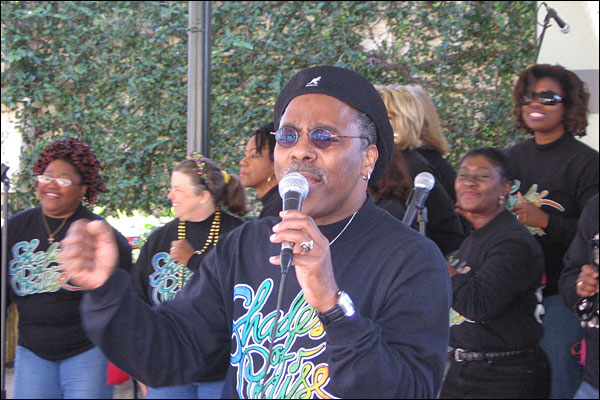 Joe King Jr. performs "Nobody But You" at the French Market in New Orleans' French Quarter. 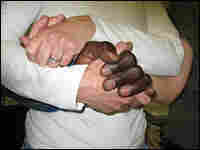 Members of Shades of Praise hold hands during the prayer circle that closes their rehearsal. John Burnett, NPR hide caption

In a city renowned for the easy intermingling of races, the members of New Orleans' Shades of Praise gospel choir say there are actually few opportunities for relationships beyond exchanged pleasantries at work or across back fences.

Since the group's creation in 2000, Shades of Praise has become something of a local phenomenon. Members sing at New Orleans' Jazzfest every year, and have performed as far away as Northern Ireland.

As the group's reputation for joyous, high-energy contemporary gospel grew, the disparate choir members found themselves growing into a sort of spiritual family. Hurricane Katrina affected them in the same way it did every other extended family in the city. The trauma of the storm was so devastating that no one was sure the choir would ever regroup.

Members worked the phones and Internet, and visited shelters looking for one another. After weeks of anxiety, everybody was finally accounted for. But more than a third of the choir members lost their homes or their belongings in the floodwaters. Suddenly, the group's role was not to be a symbol of racial togetherness, but a mutual aid society.

As of today, 20 out of 65 Shades are still living outside the city, though they sometimes come in for concerts. Through friends and supporters around the country and in Northern Ireland, the group has raised more than $55,000 to help with living expenses.

There has been much talk of what color New Orleans will be in the years after Katrina. Will it be a chocolate city, vanilla, or cafe au lait? The members of Shades of Praise don't worry about such matters. They just stand up and sing.