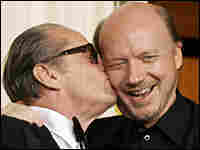 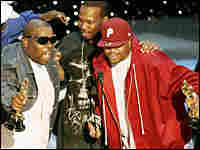 Members of Three 6 Mafia wake up the audience during their acceptance speech for best song at the Oscars Sunday night. Reuters hide caption

Thank heavens for the Three 6 Mafia.

Had that little-known rap group not jolted me awake with its boisterous, bleeped acceptance of an Oscar in the original song category for Hustle & Flow, I might have actually slept through the evening's real surprise: underdog Crash topping odds-on favorite Brokeback Mountain in the best picture category. The three-plus hours of the 78th annual Academy Awards preceding that upset were so predictable and airless that the surprise victory for T6M's "It's Hard Out Here for a Pimp" seemed positively revelatory.

Moments from the Show

Oscar 2006 was hard not only for pimps, but for host Jon Stewart in the early going. After an amusing pre-taped segment that kicked off the show, which paired off Stewart and George Clooney in a moment of Brokeback-inspired intimacy, the master of ceremonies seemed visibly stiff. The audience didn't laugh loudly until Stewart reeled off a Dick Cheney gun joke about 10 minutes in, and strangely enough that was about as political as he got all night. It was disappointing to see someone who routinely tips over sacred cows on The Daily Show tiptoe around Hollywood, let alone Capitol Hill.

After all, this year's Oscars seemed poised for heavy doses of social conscience given the sober-minded crop of films filling out the top categories. Clooney set the tone early when he picked up his award for best supporting actor, playing to the crowd by praising the Academy for its history of progressive activism. Even the seemingly apolitical March of the Penguins, which won best documentary feature, elicited an impassioned but unintelligible call to environmental action in Antarctica from one of Penguins' French filmmakers, who promptly apologized for his broken English.

And yet for all the socially conscious posturing, not a single person who made it to the podium uttered a truly politically barbed statement, an odd occurrence given such outbursts are practically Oscar tradition. So much for Hollywood's liberal bona fides during a turbulent Republican administration.

Oscar tried to have fun, too, front-loading the show with a cavalcade of A-list stars in one tired shtick after another, including Tom Hanks, Ben Stiller and Will Ferrell (whose name was misspelled on the faux marquee overlooking the stage). It was a futile effort to distract the audience from the mind-numbing obscurity of the categories occupying the first third of the show, including (in chronological order) visual effects, animated feature, live-action short filmanimatedshortfilmcostumedesignmakeupzzzzzz…

Why the Academy fails year after year to spread the high-stakes categories throughout the broadcast, insisting on smushing them together in one frenzied rush that invariably occurs after 11 p.m. ET, is a total mystery.

Otherwise, maybe a few nanoseconds of spontaneity seeped into the Oscars. My favorite moment was late in the evening when presenter Dustin Hoffman strayed from the TelePrompter and seemingly morphed into his character from Meet the Fockers, gushing congratulations to the entire room, as if he could pin all their nominations up on Gaylord Focker's trophy wall.

Even Stewart grew a little bolder the night wore on, taking a well-deserved swipe at Chuck Workman's trite set of Oscar-centric film shorts. (Incidentally, all of them paled in comparison to an eerie two-minute commercial American Express aired during the broadcast featuring M. Night Shyamalan.)

As expected, one of the Workman shorts paid tribute to Oscar 2006's unstated leitmotif, surveying socially conscious films throughout cinema history. Between that and Clooney's aforementioned speech, maybe no one should have been surprised once Crash claimed the big win. There's something apt about reserving best picture for a movie situated entirely in Los Angeles and set partly in the entertainment industry at an Oscars that ultimately suffocated itself with self-congratulation.