Accessibility links
Bouillabaisse: A Magical Yet Easy Synthesis Bouillabaisse originated as a hearty stew for Provencal fishermen, who rewarded themselves with their leftover catch. For Kara Baskin, it means a leisurely morning foraging at the fish market and an afternoon spent experimenting in the kitchen. She shares a simple and tasty recipe.

Bouillabaisse: A Magical Yet Easy Synthesis

Bouillabaisse: A Magical Yet Easy Synthesis 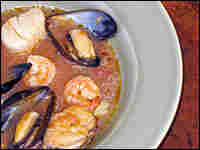 Despite its seemingly daunting list of ingredients, a basic and tasty bouillabaisse doesn't have to be difficult to make. Recipe below Maureen Pao, NPR hide caption

One rainy Sunday afternoon a couple of years ago, my boyfriend and I ducked into an eccentric Italian restaurant that had long ago stopped trying to impress customers and occasionally offered French delicacies. Sandwiched between house-made pastas and calamari fritti, I saw it: bouillabaisse. I could hardly spell it, let alone say it. As someone raised on meat loaf and boiled vegetables, this was exotic enough for the culinary explorer in me.

A cavernous pot arrived in front of me like it was Christmas: shrimp, mussels, monkfish, skate wing, bobbing in a garlicky golden broth spiked with tomato, potato, saffron and garlic. A toasted baguette came alongside, ideal for dipping.

Bouillabaisse -- the word is a fusion of two French verbs, bouillir (to boil) and abaisser (to reduce) -- originated as a hearty stew for Provencal fishermen, who rewarded themselves with their leftover catch.

Kara Baskin is an assistant editor at The New Republic magazine and development editor at the Gail Ross Literary Agency in Washington, D.C. She also writes about restaurants for DC Style magazine.

The French have dubbed this robust fish stew "the magical synthesis," and on first bite, I knew why. I plucked out a soft mussel, then discovered a droplet of piquant juice cradled in its shell -- the perfect combination of comfort and surprise.

Since that meal, I have tried to replicate the experience at home. While bouillabaisse once represented the treasures of a day spent fishing, for me bouillabaisse means a leisurely morning foraging at the fish market and an afternoon spent experimenting in the kitchen.

Perhaps the French would fault me: In Marseilles, where the dish originated, cooks hold their stew to strict standards. La Charte de la Bouillabaisse Marseillaise, a charter signed by several Marseilles restaurants, outlines an explicit plan: Fish should first be cut in front of diners, with the soup spooned on afterwards. For the stew to be authentic, it must contain at least four of five fish: chapon, John Dory, monkfish, conger eel, rascasse (otherwise known as scorpion fish, native to Marseilles) and galinette.

Of course, securing these ingredients can be almost as expensive and time-consuming as a flight to France. Fortunately, there are plenty of affordable riffs on the traditional, purist bouillabaisse. Americans enjoy many variations, and as countless U.S. recipes will attest, there's nothing distasteful about a little culinary improvisation.

Most non-oily white fish work well; I usually choose something durable, like red snapper and monkfish, both of which are easy to come by. Halibut or grouper also make nice stand-ins. Sea scallops (which are heartier than bay scallops), shrimp (best to buy de-veined) and mussels round out the potpourri.

While fish is often a matter of taste and availability, the broth of tomatoes, garlic and potato is a constant. Most important is saffron, which gives the stew its distinct golden hue. In France, wild fennel lends a pungent aroma to the broth; an acceptable stand-in is anise seed, which hits similar licorice-like notes.

While the French plan dictates that fish must be cut in front of diners, I prefer to skip the theatrics and slice solo, far from the watchful eye of guests. Perhaps it's a bit less authentic, but I find it's just as satisfying. Actually, I like to think the modern bouillabaisse's devil-may-care flexibility is distinctly French; to taste delicious, all this magical synthesis demands is a little ingenuity on the part of its creator.

The most economical and time-efficient bouillabaisse recipe I've found is one adapted from Chef Scott Cutaneo of Le Petit Chateau in Bernardsville, N.J., and was originally seen on FoodNation with Bobby Flay. This recipe serves between six to eight people. Although the recipe suggests baking each fish separately, I think it's just as delicious when baked together.

1 pound sea scallops; bay scallops are fine but much smaller

Wash and clean the seafood. Cut snapper and monkfish into 1.5- to 2-inch pieces and place each type of seafood into individual baking pans, or lay seafood side-by-side in one pan.

Add the butter and olive oil to a large pot. Add garlic, onion, carrot, leek and celery, and sweat -- cooking without browning, covered over a low flame -- until vegetables are soft. Deglaze the mixture with the half-cup of white wine and reduce the volume by half on medium heat. Add cold water to the pot to cover the vegetables and heat mixture on medium heat. Add the stock, chopped tomatoes, tomato paste, saffron threads, chervil and freshly ground (or crushed) black pepper to taste. Simmer for 90 minutes total and skim regularly. After 45 minutes, add potatoes. After 90 minutes strain sauce, return potatoes and liquid to the pot and simmer until desired consistency. Correct seasoning to taste.

Fully cover each type of seafood in its individual baking pan with the sauce. Bake for 10 minutes or until seafood is cooked through and the mussels have opened. Discard any unopened mussels. Add seafood and sauce from each pan to bowls. Serve immediately.