Accessibility links
Union Marine Diary Offers Unique Look at Civil War Edward Cotham, editor of The Southern Journey of a Civil War Marine, talks about the book. It's the diary of a Union navyman who was captured by Confederate soldiers. The diary captivated readers when a Texas newspaper published it in serial form. 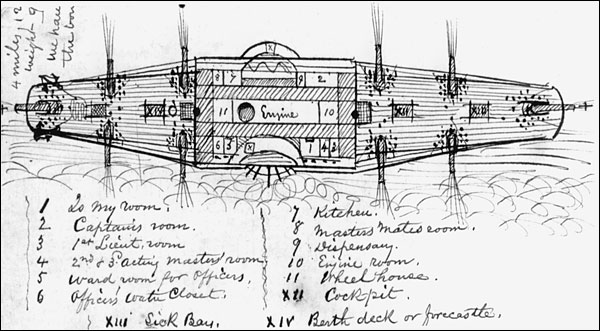 The Southern Journey of a Civil War Marine: The Illustrated Note-Book of Henry O. Gusley is the diary of a Union Marine who was captured by Confederate soldiers on Sept. 8, 1863, after the Battle of Sabine Pass. When a Texas newspaper published the journal in serial form, it captivated readers -- who found that his views about politics and slavery weren't that different from their own.

The diary is illustrated by the sketches of Dr. David D.T. Nestell, a physician aboard the U.S.S. Clifton -- who was captured during the same battle.

You can read excerpts of Gusley's diary and see more of Nestell's drawings below. 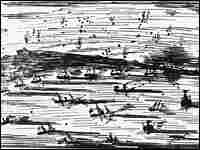 A bombardment (pictured at left) is a terrible scene, but at the same time one not altogether devoid of grandeur and sublimity. After the first few shots, the screaming of the huge shell and the whistling of the shot lose their terrific sounds, and a complete callousness to all danger appears to take possession of all. One becomes used to the blinding flash of the powder and the deafening roar of the artillery, and the sulphurous smell at first so stifling appears to impart to the atmosphere an invigorating tendency. The fiery tracks of the bombs at night are traced with feelings of the most intense interest in those who have sent them forth on their mission of death; and as their rushing noise gradually becomes less distinct, and they hang like a bright star for a moment over the fort, and then explode with a deep roar, scattering destruction, perhaps death, within its walls, a shout of triumph is heard from the ships, mingling in strange contrast with the din of the battle. Everything is forgotten, save to destroy, and when at night some continue the strife and others are detailed to bury those who have been killed during the day, they hurry to the beach and place them under the sod with as much dispatch as possible.

Today, though a date of no particular note in history, is one of importance to ourself, being no less than the anniversary of our birth. That event is recorded in the Family Bible at home as having occurred on the 26th day of November, A.D. 1837--making us, therefore, today exactly 25 years of age. It is natural for one to look back and review his past life on days like this. He is forcibly reminded that he is progressing onward in years, and though long and tedious have seemed the days and months as they were passing by, yet when we bethink ourselves of the occurrences [since] our last natal anniversary, and even the one prior to that, we are struck by the swiftness with which years are accumulating upon us. Two years ago we spent this day in the pursuits of peace at home and the number of our years was unheeded. The next found our beloved country torn by treason and divided by civil war, and ourself in the ranks of the defenders of the constitution and the laws. Today we are helping to represent that constitution and to uphold it in one of the traitor-States. Where the next shall find us we know not. But we dismiss the subject, leaving hopes for the future unexpressed, and accepting our fate as a soldier and a bachelor with all the grace in our power.

Letter from the Author of the Yankee Note-Book

This is a letter from Henry Gusley to William Richardson, the editor of the Tri-Weekly News in Galveston, Texas, the newspaper that printed the serial version of Gusley's diary.

The letter accompanying the papers I have read and duly considered. Your request for me to send you the balance of my notes up to the time of our capture I can comply with. Thus far I may prove that I am under obligations to you. But, however, much I would like to avail myself of the opportunity to express my views upon the present war and the causes which led to it, my position as a sworn soldier of the Federal Government debars me from doing so. Your supposition that, as a "freeman having still the constitutional right to express my opinions," I can do so, is erroneous. A soldier is not entitled to the free expression of his opinions, nor is he allowed to discuss and comment upon the actions of his government. The late amendments to the "act for the better government of the navy of the United States" was decisive on this point, and I should make myself amenable to the laws which I have accepted for my government whilst in the U.S. Navy, did I dare utter anything against the authority, and my duty teaches me to grant it to them without a murmur. What opinions, founded upon experience, I have expressed in my Note-Book, can scarcely be evidence against me, as they were not written for publication, nor do you give them to the world as the opinions of the crew or corps to which I belonged; but it must be obvious to you, that were I to venture any farther I would be treading upon dangerous ground. That I hold the same opinions regarding the right or the wrong of slavery and the doctrine of State Sovereignty as you have seen proper to express privately to me, I may say I do, and in this the National Democratic party and conservatives North and South agree with us. These men did not and would not agitate this question; they endeavored to allay the storm whenever it was raised, knowing as they did how fraught with destruction to the Union it was should it be pushed to extremes. But these patriots were too few for the numerous class of crafty politicians who saw in its agitation an opportunity for setting the fanatics of both sections at each others throats, and by this means advance their own interests. They attained their object and the South seceded. The right of secession was not and is not now admitted by the North. Herein, too, the National Democratic party (or a majority of them) modify the doctrine of State Sovereignty. The Union is paramount to everything with them, and in this they coincide with the Administration. You of the South continue to think differently, and argument is useless. We must remain enemies until the Union is restored, and be it with slavery extended or entirely exterminated, it is a "consummation devoutly to be wished."

Believe me, then, that the great mass of the people of the North do not uphold the Administration on the principle of abolishing slavery, but that the restoration of the Union is the grand incentive; and while such is the fact, every nerve and every sinew will be strained to bring about a victorious end.--Would to Heaven that the blood already spilled was a sufficient sacrifice for this great result.

Hoping that my reasons for not accepting your kind offer may prove satisfactory, and that you will excuse any indiscreet remark I may have made, I remain, your obedient servant. 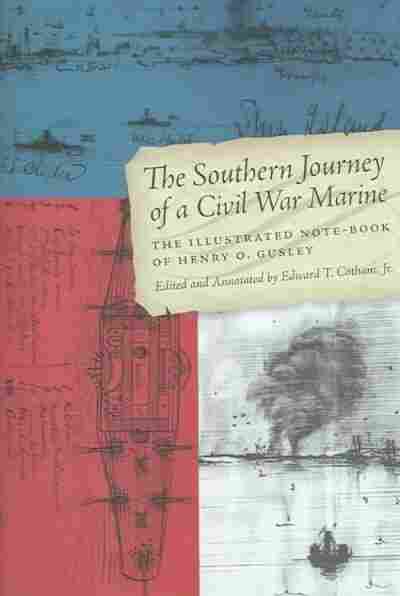 The Southern Journey of a Civil War Marine