Accessibility links
Silicosis: From Public Menace to Litigation Target In the 1930s, silicosis posed a serious public health threat to America's workers. In one notorious incident in West Virginia, at least 764 workers died from the disease during the construction of the Hawk's Nest Tunnel. But workplace safety recommendations adopted in the aftermath helped drastically reduce the disease's toll on the working class. So how did silicosis become a target for massive litigation seven decades later? Wade Goodwyn explains.

Silicosis forced itself onto the American consciousness in the spring of 1931, through what became one of the nation's worst industrial accidents: the Hawk's Nest Tunnel disaster. 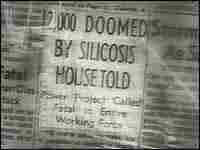 An image from Stop Silicosis, a 1938 video on the dangers of the disease put out by the Labor Department in response to the Hawk's Nest disaster. The video helps illustrate the silicosis panic of the 1930s. hide caption

In the midst of the Great Depression, 5,000 men desperate for jobs bored through West Virginia's Gauley Mountain to build an engineering marvel: the Hawk's Nest Tunnel. The tunnel was part of a larger project to supply hydroelectric power to a Union Carbide company. Many of the workers underground were black and migrant.

Gauley Mountain proved to be a killer of unprotected workers. Made of silica quartz, the hill coated men's lungs with millions of microscopic crystals as they drilled and blasted through it. Workers died so fast that they were reportedly buried in a cornfield in an attempt to cover up the extent of the tragedy. More than 764 workers are believed to have perished. As the 1938 Department of Labor video at left shows, Hawk's Nest prompted a congressional investigation into the silicosis threat in the workplace. The result was new workplace safety regulations that helped drastically reduce the disease's toll among the working class. The video is a fascinating window into the politics of the period -- and a lesson about just how much was known about silicosis 70 years ago.

Screenings of workers for lung disease have been around for more than half a century. But the nature of screenings began to change during the 1980s and '90s, and asbestos litigation drove those changes. Instead of a company or trade union screening workers known to be at risk for exposure, lawyers and screening companies began advertising to the general public. These so-called "mass screenings" significantly enlarged the pool of prospective litigants. Tens of thousands of asbestos and silica claims were generated in the last decade using mass screenings.

Judges say both plaintiff and defense lawyers bear responsibility. They charge that defense lawyers have been all too quick to settle out of court. Without judges and juries to weed out and defeat questionable cases in court, plaintiff lawyers learned that any asbestos claim would likely lead to some payment. That defense strategy essentially green-lighted mass claims. Plaintiff lawyers earned more than $18 billion in asbestos litigation, but defense lawyers made even more: nearly $21 billion, according to research from the RAND Corporation.

Other dynamics also drove the mass screenings and mass filings. Over time, plaintiff lawyers learned there was safety in numbers. Lawsuits involving tens of thousands of claims, augmented by a list of defendants that ran into the dozens, became a recipe for settling out of court. Even defendants inclined to fight tended to be dissuaded by the complicated nature of the litigation. Conventional corporate and legal wisdom held that it was easier to pay each claimant a few hundred or a few thousand dollars and move on. For many asbestos-connected companies, this strategy proved to be a fatal mistake. In the latter part of the 20th century, asbestos defendants learned the hard way that there was no moving on when it came to asbestos litigation.

In Mississippi, the jump from asbestosis to silicosis litigation was in part a reaction to tort reform legislation. Senate Republicans on Capital Hill wrote a trust fund bill that would take asbestos suits out of the courts entirely. The defendants would create a fund in excess of $100 billion; claims would be paid out without juries, judges or lawyers.

The fund signaled a possible end to four decades of litigation, during which some $70 billion changed hands, with more than half going to asbestos plaintiff and defense lawyers. In Mississippi, instead of focusing solely on asbestos lawsuits, plaintiff advocates added silica to their repertoire. The screening infrastructure was already in place and humming along. Before tort reform, hundreds of silicosis claims were being filed; seemingly overnight, those claims numbered in the tens of thousands.

The defendants successfully moved to get the lawsuits out of Mississippi state court and into federal court into what is called an MDL, or multi-district litigation. It was the plaintiff's poor luck that the case fell to a judge in Corpus Christi, Texas, who'd been a nurse in a previous career.

U.S. District Judge Janis Jack understood medical protocols and quickly suspected something was not right with the cases. She demanded that the X-ray reading specialists (the "B-readers") and the screening company executives be deposed in her court. More importantly, she asked for exposure and medical histories for each of the 10,000 claimants. Taken together, the claim data revealed that nearly 70 percent of the silicosis claimants had previously filed asbestos claimants. In her ruling, Jack raised the specter of fraud. In the wake of Jack's opinion, plaintiffs' attorneys have voluntarily dismissed nearly two-thirds of the Mississippi silicosis claims.