Accessibility links
Who Will Own the 'New' New Orleans? One of the most important questions facing the Crescent City struggling to rebuild from Hurricane Katrina is whether homeowners, government, and businesses will collaborate to rebuild the city -- or compete for control.

Listen
Who Will Own the 'New' New Orleans? 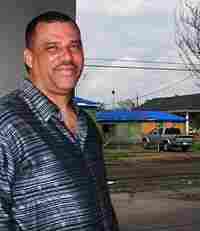 The words "Ninth Ward" have come to symbolize a ravaged New Orleans. But the damage to the city is widespread, not just in the poorest areas, and rebuilding efforts will take years. One of the most important questions facing the Crescent City is whether homeowners, government and businesses will collaborate to rebuild the city -- or compete for control. 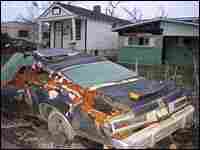 Much of the Lower Ninth Ward is uninhabitable -- even the animals are gone. The floodwaters of Hurricane Katrina washed arsenic and lead into the soil, and toxic mold spores filled the air. Many in the community want to see the area rebuilt, not returned to wetlands or paved over to be an industrial zone.

"The people that are from this community definitely need to be at the table with any plans that talk about redevelopment," says City Council President Oliver M. Thomas. "It needs to be a meeting with the people who have lived, died and toiled in this community. It has to be inclusive."

Individual homeowners still own much of the land under the city, but that might change in a rebuilt New Orleans. Many residents face a complex maze of insurance claims and damage assessments in order to get their homes rebuilt. For the moment, banks are holding off on what could be a wave of foreclosures -- homeowners are selling instead of rebuilding, and buyers are snapping up the properties.

Those private sales, however, could pale in comparison to potential government buyouts. The state of Louisiana is expected to get billions in federal dollars to pay off thousands of homeowners. But what will the state do with the property then?

A recent Supreme Court ruling has opened the door to allowing governments to use eminent domain to force owners to sell, and possibly use the land not just for government use but also for private development. But until the federal, state and local governments figure out what to do, individual families are keeping the city alive -- at least for now.