Accessibility links
Columnist Art Buchwald Leaves Us Laughing Humorist Art Buchwald has died at the age of 81. The Pulitzer Prize-winning author and columnist, suffering a debilitating kidney failure, took himself off dialysis last February, left his hospice and survived another 11 months — long enough for a final book. 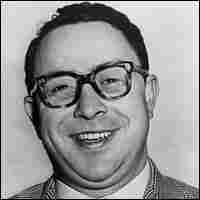 On Meeting Hemingway: All Things Considered, 1996

A Paris Wine-Tasting: All Things Considered, 1996

Humorist Art Buchwald has died at the age of 81. The Pulitzer Prize-winning author and columnist, suffering a debilitating kidney failure, took himself off dialysis last February. Doctors gave him weeks to live. Instead, he left his hospice and survived another 11 months.

He wrote a final book — Too Soon to Say Goodbye — about the experience.

"The last year he had the opportunity for a victory lap and I think he was really grateful for it," his son, Joel Buchwald, said. "He had an opportunity to write his book about his experience and he went out the way he wanted to go, on his own terms."

At the height of his popularity, Buchwald was syndicated in hundreds of newspapers, where he poked fun at the foibles of celebrities and politicians.

There was little in young Arthur Buchwald's situation that seemed very funny. His father went broke in the Depression. His mother was institutionalized shortly after his birth. And Buchwald and his sisters were shuttled between an orphanage and separate foster homes.

It was an often wretchedly unhappy — and hugless — childhood. But in this 1994 interview with NPR, Buchwald said he had no idea of this reality at the time: "While I was living it, I don't think I said, 'This is rotten.' I did discover early in life I could make people laugh. That's what's changed my life, because as long as I could make 'em laugh, I could get a lot of love."

Buchwald didn't finish high school. Instead, he dropped out at 17 to join the Marines during World War II and served in the Pacific. After the war, he went to the University of Southern California on the G.I. bill and wrote columns for student newspapers — but dropped out again to head to Europe.

He forced his way onto the Herald-Tribune there, recounting anecdotes about restaurateurs, celebrities, and the occasional monarch. A true believer in the value of a good stunt for a column, he once marched in a May Day parade in East Berlin and headed to Turkey, ostensibly to write about Turkish bathhouses but finding none.

Ben Bradlee, who became the executive editor of The Washington Post, was one of Buchwald's best friends. Bradlee says Buchwald relied on current events for inspiration — most of the time: "My God, he wrote nine zillion columns. He wrote a very famous one about explaining Thanksgiving to the French. He used to run it every Thanksgiving, got an extra day off."

Buchwald returned to America in 1961 because he said it was a better place to raise his children. Politics became his primary focus, and he found Washington rich with targets.

In 1974, Buchwald told graduates at Holy Cross College, "As a humor columnist, I need President Nixon more than he needs me. I worship the quicksand he walks on."

He continued writing, winning a Pulitzer for commentary in 1982. He also wrote books and plays and pitched a script to Paramount Pictures about an African prince visiting the United States. But Paramount made the Eddie Murphy movie Coming to America with the same storyline and said it wasn't Buchwald's plot.

He sued — not for plagiarism, but for breach of contract. When the case went to court, the studio claimed the movie, a major hit, hadn't made a profit.

Throughout his successes, Buchwald battled depression. So did two of his neighbors on Martha's Vineyard: CBS newsman Mike Wallace and the author William Styron.

The three men called themselves the Blues Brothers. Wallace says Buchwald tried to joke the others into a good mood. "No matter where I was in the United States or abroad," Wallace said, "He would find me and try to talk me out of the slough of despond that I was in."

Buchwald later wrote about his depression, hoping to share with others the ability to endure such pain.

Last year, he also suffered a series of setbacks to his health. When his kidneys started to fail, he refused dialysis, and instead, prepared for his own death.

Mike Wallace recently asked his friend about his legacy. "He virtually shouted it," Wallace recounted. "'Joy! That's what I'm going to leave behind.'"

Buchwald spoke to NPR shortly before his death. He said he was ready: "I've had a good life, I'm 80 years old, and I'm going out the way I want to."

Just a few years ago, Buchwald even found a way to joke about that. He told Phil Donahue, "I was going to be cremated and have my ashes spread all over every cocktail party on Martha's Vineyard."

Associated Press contributed to this story.

The Man Who Would Not Die

This column was written by Art Buchwald from the hospice in Washington, D.C., where he was undergoing care. Buchwald stopped writing his regular column at the end of December, but offered this update on his condition, and his life, on March 7, 2006.

I am writing this article from a hospice. But being in a hospice didn't work out exactly the way I wanted it to. By all rights I should have finished my time here five or six weeks ago -- at least that's all Medicare would pay for.

What happened was, I was riding the elevator at the acute care facility next door when I saw a sign that said there was also a hospice in the building. I arranged a tour and everything looked very good to me.

I talked to my doctor, Mike Newman, and he said, "It's your choice. You're the only one who can decide what you want to do." Which was, I thought, a good answer. That's when I decided to discontinue dialysis.

One of the reasons for the decision was that I lost a leg at Georgetown Hospital. I miss my leg, but when they told me I would also have to take dialysis for the rest of my life, I decided -- too much.

Several things happened. My decision coincided with an appearance on Diane Rehms radio talk show. She has over a million listeners. I talked with her about my decision not to take dialysis. The response was very much in my favor. I had over 150 letters, and most of them said I did the right thing. This, of course, made me feel good.

It is one thing to be in hospice; it's another to get on the air and tell everybody about it.

When I got to the hospice, I was under the impression it would be a two- or three-week stay. But here I still am, six weeks later, and I've gotten so well Medicare won't pay for me anymore.

Now this is what it's like for someone who is in the hospice: I sit in a beautiful living room where I can have anything I want and I can even send out to McDonald's for milkshakes and hamburgers. Most people who are not in hospice have to watch their diets. They can't believe I can eat anything I want.

I have a constant flow of visitors. Many of them have famous names, so much so that my family is impressed with who shows up. (I would not be getting the same attention if I were on dialysis.) I hold court in the big living room. We sit here for hours talking about the past, and since it's my show, we talk about anything I want. It's a wonderful place to be, and if for some reason somebody forgets to come see me, there's always television and movies on DVD.

I keep checking with the nurses and doctors about when I'm supposed to pull out. No one has an answer. One doctor says, "Its up to you." And I say, "That's a typical doctor's answer."

I receive plates and baskets of delicious food -- home-cooked meals from my son and daughter-in-law, treats from the delicatessen and frozen yogurt from Haagen-Dazs.

Everybody wants to please me. Food seems to be very important, not only to my guests, but also to me. If they bring food, they get even better treatment from me. One day I told a friend I wanted a corned beef sandwich. The next day I got 10 corned beef sandwiches.

Also, I have received dozens of flower arrangements, something I would never get if I were on dialysis.

I don't know if this is true or not, but I think some people -- not many -- are starting to wonder why I'm still around. In fact, a few are sending me get-well cards. These are the hard ones to answer.

So far things are going my way. I am known in the hospice as The Man Who Wouldn't Die. How long they allow me to stay here is another problem. I dont know where I'd go now, or if people would still want to see me if I wasn't in a hospice. But in case you're wondering, I'm having a swell time -- the best time of my life.