Accessibility links
Letters Offer Glimpse of Life in Nazi Labor Camps Many exhibits have explored the horrors of Nazi death camps, but much less is known about Nazi labor camps. On Tuesday. the New York Public Library opened an exhibit of 300 Holocaust-era letters saved by a Jewish woman who, as a teen, spent five years in the labor camps.

Many exhibits have explored the horrors of Nazi death camps, but much less is known about Nazi labor camps. On Tuesday the New York Public Library opened an exhibit of 300 Holocaust-era letters saved by Sala Garncarz, a Jewish woman who, as a teen, spent five years in the labor camps.

Garncarz was interned in seven different Nazi labor camps between 1940 and 1945. She worked as a seamstress. Although conditions at labor camps were often harsh, unlike at concentration camps, laborers could sometimes receive mail.

At the age of 16, Garncarz left her home in Poland and entered the Geppersdorf camp, choosing to go instead of her more fragile older sister. Over the next five years she kept every piece of mail she received, more than 300 letters, postcards, drawings and photographs.

At times, Garncarz hid the letters in her clothes and even buried them, managing to take them secretly from camp to camp. After the war, she married an American soldier, and she hid the letters from her family for more than 45 years. In 1991, before going into the hospital for heart surgery, Garncarz gave the letters to her daughter, Ann Kirschner, who says her life changed in an instant.

"It became my privilege to do what very few daughters have been able to do," Kirschner says, "to get to know their own mother as a brave and beautiful 16-year-old girl, trying to navigate the most hostile of circumstances with courage and integrity."

Sala Garncarz Kirschner is now in her 80s. She says she kept the letters hidden in a closet for so long after the war in order to spare her children the burden of growing up with guilt about their mother's Holocaust experiences.

Ann Kirschner says she understands the long silence. Her mother wanted to live in the present, and did not want to hand along her own nightmares: "I have met other children of survivors who were overburdened, who came out with a pessimistic view of the world and a sense of a fear and a lack of interest in their parents' history, because they'd had too much of it."

But these letters, she says, are more than a family's chronicle of survival: They document a vast network of Nazi slave labor camps, about which very little has been written even today.

The letters will be on exhibit through June 17 and will remain a part of the New York Public Library's collections. 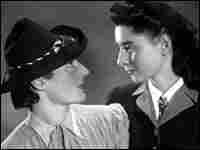 Sala Garncarz (right), pictured with Ala Gertner in Sosnowiec, Poland, in September 1941, during the only time she was allowed out of a labor camp. Gertner looked out for Garncarz at the Geppersdorf camp. hide caption