The Bush administration tells Iran that enrichment of nuclear fuel on Iranian territory is unacceptable. Secretary of State Condoleezza Rice delivers the message after meeting with Russia's foreign minister. The new dispute shows the growing strains in U.S.-Russian ties. 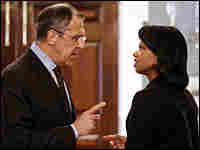 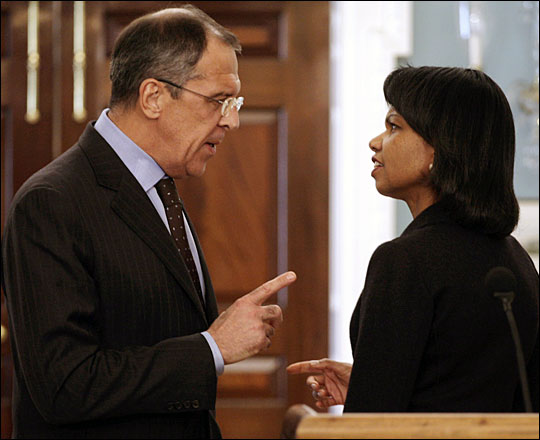 Russian Foreign Minister Sergei Lavrov (left) talks to U.S. Secretary of State Condoleezza Rice after their meeting at the State Department in Washington on March 7, 2006.

And I'm Melissa Block. The U.S. and Russia are glossing over differences in the way they're dealing with Iran's nuclear program. The Bush administration has been trying to build up international pressure on Iran to give up its nuclear ambitions. Russia would prefer not to see the issue come up at the United Nations Security Council and has been negotiating a way to avoid an international showdown. NPR's Michele Kelemen reports.

MICHELE KELEMEN: In the big picture, the Russians and the Americans are on the same page. Both say they want to prevent Iran from gaining the technology to build a nuclear bomb. The U.S. has supported a Russian proposal to provide Iran with nuclear fuel for civilian reactors as long as the spent fuel is then sent back to Russia. Foreign minister Sergei Lavrov said that remains on the table, and he dismissed reports that Moscow is offering a last-minute compromise to allow Iran to produce small quantities of enriched uranium at home.

KELEMEN: Secretary of State Condoleezza Rice also played down suggestions of a compromise.

CONDOLEEZZA RICE: I think the United States has been very clear that enrichment and reprocessing on Iranian soil is not acceptable because of the proliferation risk.

KELEMEN: But while Rice publicly supported the original Russian proposal, U.S. officials have privately complained that Iran is using it as a stalling tactic. The Bush administration wants to haul Iran before the United Nations Security Council to try to ratchet up pressure. Foreign Minister Lavrov wouldn't say whether Russia would support U.N. sanctions, and Rice didn't push it.

RICE: We will see what is necessary to do in the Security Council. There is still time, of course, for the Iranians to react, but we have been very clear that we did not think that as a first matter we would try to move to sanctions in the first step of the Security Council.

KELEMEN: How well Russia and the U.S. work together on this will be a test for relations, according to former Democratic vice presidential candidate John Edwards, who coauthored a report for the Council on Foreign Relations.

JOHN EDWARDS: We believe this is a litmus test for our relationship with Russia. There are obvious things that we need from the Russians going forward. We need Russia with us in the Security Council. We need them to be strong and be willing to support sanctions.

KELEMEN: The report he released yesterday along with Republican Jack Kemp says U.S.-Russian relations are headed in the wrong direction and the two countries have rarely acted as partners. The report criticizes, for instance, Moscow's decision to host the Palestinian militant group Hamas. And it says Russia is steadily becoming more authoritarian. Edwards argues that President Bush woke up to this too late.

EDWARDS: George Bush has been too soft on Vladimir Putin. It appears to be the result of his personal relationship with him. They've gotten an awful long way down the road on the wrong path without America and its allies in a unified way trying to change that.

KELEMEN: There are some members of Congress who want to see Russia kicked out of the Group of Eight industrialized democracies, which Moscow chairs this year. The Council on Foreign Relations task force doesn't go that far, though Jack Kemp said the original members of the G-7 should meet before the next summit to make a point.

KELEMEN: Kemp and the task force called for more realistic dealings with Russia. That's something State Department officials say they are already doing, as they try to work with Russia on Iran and also raise concerns about Russia's slide back from democracy.