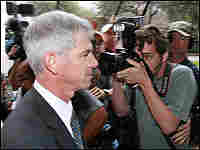 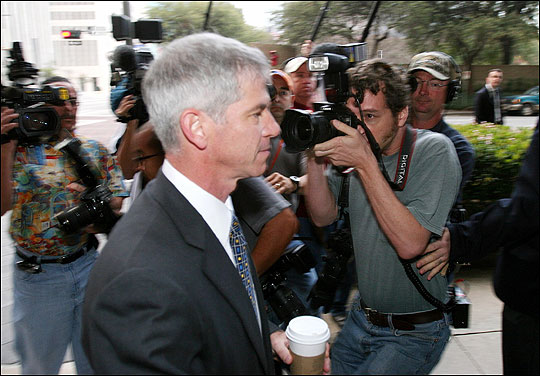 Andrew Fastow, Enron Corp's former financial chief and the architect of its accounting schemes, arrives at Federal court in Houston to take testify at the trial of his former bosses Ken Lay and Jeffrey Skilling, March 7, 2006. REUTERS/Richard Carson

And I'm Michele Norris. It was a day of high drama at the Enron trial in Houston. Andrew Fastow, Enron's former chief financial officer, took the stand to testify against his former bosses, Chairman Kenneth Lay and CEO Jeffrey Skilling. For the first time in the trial, Fastow directly connected Skilling to a conspiracy to minimize losses and thus make the company's earnings look better. Fastow testified that he created off-the-books partnership in order to help Enron "make its numbers." He said the sham deals boosted the company's bottom line by hundreds of millions of dollars. NPR's Wade Goodwyn is in the federal courthouse in Houston. He joins us now. Wade, Andrew Fastow struck a deal with prosecutors, a ten-year sentence in exchange for his testimony. Is he giving the prosecutors what they wanted?

WADE GOODWYN: Yes, he is. His testimony has centered on the off balance sheet partnerships, one of which was called LJM. Fastow said that LJM was created to make Enron's financial statements look the way they wanted them to look. And he said that Enron's chief accounting officer, Rick Causey, and the CEO, Jeff Skilling, understood exactly what was going on with the partnerships. In fact, in order to allow Enron's CFO to become essentially the CEO of another company, the board of directors had to waive the company's code of conduct in relation to Fastow, and Fastow said that he and Skilling helped convince the board that this highly unusual arrangement was going to be good for Enron's bottom line.

NORRIS: And these off-the-books partnerships, I assume that they were initially good for Enron's bottom line.

GOODWYN: They were initially. What LJM and the other partnerships did was buy from Enron assets that weren't performing, for example, part of a power plant in Brazil or power barges in Nigeria. These were projects that were going extremely badly, and no truly independent third party would have ever agreed to buy into these stinkers. But Andy Fastow and LJM would. So instead of having to book big losses, Enron could sell parts of them, often at ridiculously inflated prices, and then book these deals as income. But the sales were fake. For example, Fastow testified that on the Brazilian power plant sale, Skilling personally assured him that LJM would never lose money on the deal and that Enron would eventually take LJM out of the deal by buying the power plant back if necessary. These side deals were never written down, but over time Enron and LJM entered into so many of them that Fastow finally had to write it all down by hand so that he wouldn't lose track of it, and he called it the Global Galactic List.

NORRIS: So Fastow, the CFO, fingered his former boss, CEO Jeffrey Skilling. How closely was he able to tie Skilling to these transactions?

GOODWYN: Well, pretty closely on the Brazilian power plant deal. Fastow said that Skilling promised him to his face that LJM would be protected from losing money. The ramifications of that promise is that the deal was not a deal. That's illegal. On other transactions, Fastow said that he dealt with the company's chief accounting officer, Rick Causey, who told him that Skilling had been briefed and approved of the details. Fastow called this the "understanding," and he said he never doubted that Jeff Skilling would honor his word and that his trust was well placed, that Skilling always did honor the secret arrangements.

NORRIS: And what about Fastow's other boss, founder and chairman of the company, Kenneth Lay?

GOODWYN: Ken Lay's name hardly came up. Fastow did testify that Lay had been briefed about the declining value of the partnerships. That was in late 2000, early 2001. He said top management understood the threat that it posed to Enron's bottom line if the decline in those values continued. So the notion that Lay knew how the partnerships worked was talked about. But most of the testimony was crafted around how much Skilling knew, so I expect his lawyers will take the lead in cross-examining Fastow tomorrow.

NORRIS: And any hint as to how defense attorneys might tackle that?

GOODWYN: You're quite welcome.

NORRIS: NPR's Wade Goodwyn at the federal courthouse in Houston. And you can read profiles of key players in the Enron trial at our website, NPR.org.