Accessibility links
The Real West: Not So Wild? HBO's Deadwood couldn't return to TV soon enough for Ketzel Levine. So she heads off in search of the real West, and busts some myths along the way.

Listen
The Real West: Not So Wild?

I am a sucker for TV westerns. The Wagon Train theme brings tears to my eyes. The music from Rawhide gives me "move 'em out" courage. One stanza from Have Gun -- Will Travel and I'm ready to roam. I happen to hate the theme from Bonanza but like millions of others, I have that burning map imprinted on my brain. 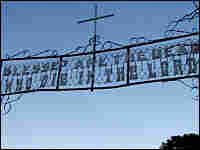 So, like so much tumbleweed across the Ponderosa, I set out for Cartwright Country: Virginia City, Nev. With its gen-u-wine locomotive rides and long, wooden sidewalks, Virginia City is the rival of any TV town: shoot 'em ups on the hour, honky tonk saloons and the glitter of hard rocks.

Beneath this town lie 700 miles of tunnels. As the site of the richest silver strike the world had ever seen, it was an opulent city that bore no resemblance to the storied Deadwood, S.D. In 1876, when Wild Bill Hickok rode into that lawless swill of a town, Virginia City was already rebuilding itself in brick. It had an opera house, a four-story hospital and a local chapter of the B'nai Brith.

Music to Roam By

There weren't any famous gunfighters in Virginia City, though, and most of the women were housewives rather than Calamity Jane types. So I leave Nevada sadder, wiser and far less likely to embarrass myself on the subject of 19th century America. Forget the steely gaze of a ruddy-cheeked cowboy looking out from under his rawhide brim; the heroes and villians in this town were sallow-skinned miners -- and worse yet, businessmen.

But as I head out highway 395, southbound for California, little do I know the peril still awaiting my precious myths -- and all because of a sweet-talking guy. Historian Guy Rocha takes me to the ghost town of Bodie, Calif., named after an ill-fated prospector who staked a claim in a godforsaken landscape and froze to death before he could cash in.

Bodie is a heartbreaker: A main street once raucous with mule trains and stagecoaches is now Death Valley dust. I imagine a resident coming home and staggering into bed for a "coyote-quiet" night. But Rocha busts that myth: Bodie was a mining town. Think dynamite, and the deafening roar of stamp mills making bullion out of ore.

I've seen some miles since I left home. But only from this distance, from this blank canvas of a ghost town, can I see the details of my American frontier: Helene Avenue, Merrick, N.Y., on the sofa in the den, wearing pajamas with feet and watching westerns with my father.