Accessibility links
Dubai Company Bails Out on Ports Deal The Dubai company that was to acquire rights to manage U.S. ports announces it will transfer the rights to a U.S. entity. The deal was soundly rejected by a House committee, and Republican congressional leaders told President Bush that the deal should be scrapped.

The Dubai company that was to acquire rights to manage U.S. ports announces it will transfer the rights to a U.S. entity. The deal was soundly rejected by a House committee, and Republican congressional leaders told President Bush that the deal should be scrapped. 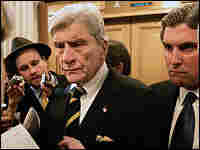 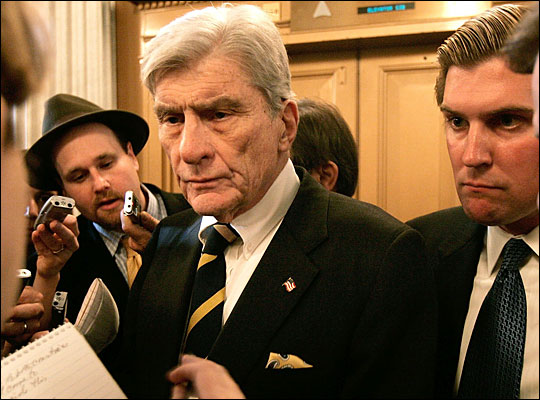 And I'm Melissa Block. The controversial ports deal took a sharp turn today, with Dubai Ports World offering the Bush Administration an out. The company said it would be willing to transfer operations at U.S. ports to a U.S. entity. It did not say what that entity would be. The surprise announcement came a day after a House panel voted overwhelmingly to block the sale, and hours after Republican congressional leaders went to the White House to tell President Bush the deal was dead. We'll hear about the politics of all this in a few minutes. First, to NPR's Brian Naylor, at the Capitol.

The Republican congressional leaders had a gloomy message for the president. Just yesterday the House Appropriations Committee voted 62-2 to stop the ports deal, and Democrats in the Senate were maneuvering to force a vote in that chamber. Reading the writing on the wall-and the votes-the Republican leaders told the president the ports deal would not fly. The president had threatened to veto any legislation blocking the sale, a threat reiterated earlier today by spokesman Scott McClellan.

Then came a dramatic announcement on the Senate floor. Armed Services Committee Chairman John Warner, who supported the deal, read a press release from the head of Dubai Ports World, Theodore Bilkey.

Senator JOHN WARNER (Republican, Virginia): Because of the strong relationship between the United Arab Emirates and the United States, and to preserve that relationship, DP World has decided to transfer fully the U.S. operation of P and O Ports North America to a United States entity.

NAYLOR: Critics of the sale were at once happy, but wary. Democratic Senator Charles Schumer of New York has been a leading opponent.

Senator CHARLES SCHUMER (Democrat, New York): We now smell the scent of victory. It seems quite certain that given the action in the House committee yesterday and on the Senate floor today that this deal will not go forward.

NAYLOR: But, Schumer said, in a remark that echoed throughout the Capitol today, the devil is in the details. Republican Congressman Mark Foley of Florida said far too little is known about Dubai Ports World's plan to declare victory.

Representative MARK FOLEY (Republican, Florida): Now they're talking about an American company. Is that an American company owned by the United Arab Emirates? Are we just changing the nameplate on the door? These are significant questions that need to be answered. But the fact that I receive a press release from His Highness telling me he's giving me back my ports, temporarily, troubles me.

NAYLOR: Foley had been an early opponent of the ports deal, a movement that gathered steam in the past two weeks after word of the sale spread. Critics pointed to the fact that two of the 9/11 hijackers came from the United Arab Emirates, of which Dubai is part. They said the country's banks had served as conduits for al-Qaida funds. President Bush and defenders of the sale said the UAE has since been an important ally in the war on terror. But the politics of the issue ultimately did the sale in. Lawmakers said their offices were overwhelmed with phone calls from constituents. Republican Peter King of New York, another vocal critic of the sale, said today's announcement is a victory for the American people.

Representative PETER KING (Republican, New York): It was a perfect storm. I mean, everybody came together. Many Democrats disagreed. Others will disagree with the president no matter what he does. A number of Republicans, many Republicans thought this was the wrong deal. Others maybe wanted to put distance between themselves. Whatever it is, everything came together, and you just had a, and also you had the American people speaking with, I've never seen such unanimity on a controversial issue or an intense issue among the American people.

NAYLOR: Who benefits from this politically remains to be seen. Congressional Democrats hope that by being out in front of the issue, they gained credibility among voters on national security, where they've long trailed Republicans. Republicans, on the other hand, can say they had the political courage to stand up to the president. One thing seems clear. It's the White House that stands to lose the most from losing this deal.

Inside the Politics of the Dubai Ports Controversy March 9, 2006