Read a Chapter from 'Making Friends with Black People' at KensingtonBooks.com

All right folks, here are a few tips for whites getting to know the black people around them. Don't tell your black co-worker they look just like another black co-worker over in the other building. And steer clear of Hip Hop slang, and definitely don't start sentences with, I'm not a racist but. That's the sage advice of comedian Nick Adams. His new book, Making Friends with Black People is a humorous how-to on bridging racial divides.

Nick Adams, welcome to the program.

GORDON: Hey, man, let me ask you. What was the impetus of putting this book together?

Mr. ADAMS: Boredom. I was living in Tucson, Arizona. I don't know if you've ever been to Tucson. Not a lot of our people there. I was on the South side of Tucson and everything and still didn't see any black people. And just looking for something to do, and I had a lot of material that I had written for my act, and I didn't have anything better to do with my time, so I thought I'd go ahead and try to pound out a book.

GORDON: You have essential dos and don'ts. Go through some of those with us.

Mr. ADAMS: Don't try to initiate a conversation with black people based on something you think we know about. For instance, if a white person were to say, hey, that new Jay Z album is great, it gets filtered through 400 years of racism and slavery and murder and all that stuff, and it comes out like, hey, that watermelon is great. We're just always on edge about stuff like that.

And if you're a white woman, don't go into a relationship with a black man expecting certain things, you know what I'm saying, because that's a lot of pressure for a black man. I can run fast and jump high--two out of three ain't bad, lady.

GORDON: When you talked about all of this and decided to put it in a book, did you understand that humor might allow you to talk about some sensitive issues that most people are uncomfortable with in mixed company?

Mr. ADAMS: Absolutely. I mean, that's one of the things I love about doing comedy, and one of the things that I loved about writing this book. You can say stuff that might take people aback, but if you couch it in a humorous way, everyone is more open to it. For example, why is a white woman missing, national news? I mean, why is it? I understand if someone goes missing, it's important to that family; it's important to maybe that community. But if a white woman is 20 minutes late from coming back from the grocery store, there is a bulletin on CNN. That's not a network story.

GORDON: What was the hardest thing for you to make funny?

Mr. ADAMS: I talk about the school shooting incident, and it may come off in the book as pretty flip.

Mr. ADAMS: Exactly. Those were horrible, horrible circumstances, and my heart goes out to anybody who lost a loved one in the school shooting incident. This was an incredibly affluent suburb, but yet something happened in them that caused them to do this horrible, horrible thing. But after that happened, all of a sudden it was about compassion and tougher restrictions on gun control. But when black kids were shooting each other, it was about three strikes and you're out, and these gang bangers. There was no compassion for those children.

GORDON: When you think of someone like Eminem, who many people will acknowledge has talent, but some will say, like Elvis Presley, is stealing from the roots of black America, how much do you lay credence to: here is just a white guy who is very talented in what is disproportionately a black genre?

Mr. ADAMS: I don't consider Eminem a thief. I believe that he is doing this genre of music because that's what he feels in his heart and soul. I think he really believes in what he's doing. But when white America puts him on the cover of magazines and celebrates him -- and he's been celebrated way more than any black Hip Hop artist ever has been.

So what you're telling us that yet we know black people have been doing this form of music for over 20 years, and we know about Biggie and Tupac and Noz and Jay-Z and Mos Def and [unintelligible] and Run DMC, but I think this white guy might really be on to something. It's just ridiculous. It's as if Charlie Pride was considered to be the greatest country artist of all time, and people would go nuts if that happened.

GORDON: It seems to me often, African-Americans though, when they find a white person that is genuine in their love of our culture--I think of the singer Tina Marie, or maybe even Eminem, there is a sense of wanting to embrace them and truly bring them into the family. Do you find that? And do you also find that it the other way?

Mr. ADAMS: I think it is true. My wife went to school with Tiger Woods and he had the whole fear of Cablinasian and all that stuff. And we just want to claim people. I think minorities historically have been so downtrodden that if anyone even remotely reminds us of ourselves, we're welcoming them in with open arms, regardless of whether they're actually black or not. And I think Tina Marie and Eminem, and I was a big fan of the rap group Third Base when I was a kid, and we love all those people. Even someone who just has -- maybe someone that doesn't even do or perform something that's, quote/unquote "black." If someone just seems cool, like someone like George Clooney...

I saw George Clooney at the House of Blues at a Roots concert, just hanging out at a Roots show with a bunch of rappers. He wasn't trying to be black. He wasn't going out of his way to associate with anything black. I think he just liked the music and decided he would come on out.

GORDON: All right. Nick Adams. The book is Making Friends with Black People.

We appreciate your time, buddy.

Mr. ADAMS: My pleasure. Thanks a lot, Ed.

GORDON: That's our program for today. Thanks for joining us. 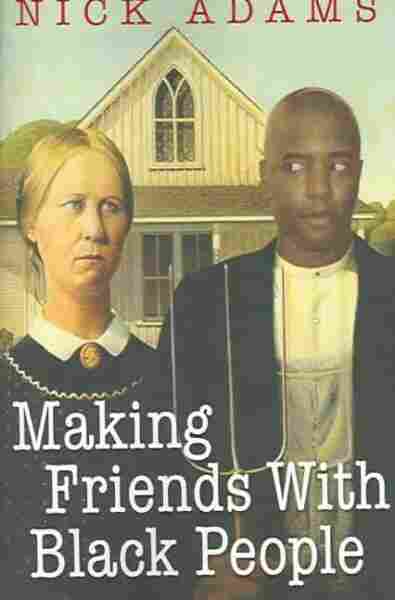