Accessibility links
The People Have Spoken After 40 years of working in politics, pundit Mark Shields has seen the best and worst of our democracy. But he still believes good politics and courageous politicians can benefit our society.

Listen
The People Have Spoken 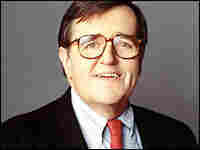 Mark Shields has worked in politics for more than 40 years. He started as an assistant to Wisconsin Sen. William Proxmire, then worked on four Presidential campaigns and numerous other races. Shields is a political analyst for NewsHour on PBS. Courtesy of Mark Shields hide caption

I believe in politics. In addition to being great fun, politics is basically the peaceable resolution of conflict among legitimate competing interests.

In a continental nation as big and brawling and diverse as ours, I don't know how else -- except through politics -- we can resolve our differences and live together. Compromise is the best alternative to brute muscle or money or raw numbers. Compromises that are both wise and just are crafted through the dedication, the skill and, yes, the intelligence of our elected politicians.

I like people who run for public office. For most of us, life is a series of quiet successes or setbacks. If you get the big promotion, the hometown paper announces your success. It doesn't add, "Shields was passed over because of unanswered questions about his expense account" or "his erratic behavior at the company picnic."

But elections have been rightly described as a one-day sale. If you're a candidate, your fate is front-page news. By 8 o'clock on a Tuesday night, you will experience the ecstasy of victory or you will endure the agony of defeat. Everybody you ever sat next to in study hall, double-dated with or baby-sat for knows whether you won or, much more likely, lost. Politicians boldly risk public rejection of the kind that the rest of us will go to any lengths to avoid.

Having worked on four losing presidential campaigns earlier in my life and having covered the last seven as a journalist, I admire enormously the candidate able to face defeat with humor and grace. Nobody ever conceded defeat better than Dick Tuck who, upon losing a California state senate primary, said simply, "The people have spoken…the bastards."

But I believe in politicians who are courageous. The first time I ever slept in the same quarters with African-Americans or took orders from African-Americans was at Parris Island in Marine Corps boot camp, and it was the political courage of one man, President Harry Truman, who ended the racial segregation of the U.S. military because he believed that fairness is at the heart of our values as a nation.

I admired the courage, too, of Ronald Reagan. In 1978, after voter initiatives discriminating against gays had prevailed in Miami, St. Paul and Eugene, Ore., a conservative-backed ballot measure in California to ban homosexuals from teaching in the state's public schools was favored to win until Ronald Reagan made the difference by campaigning successfully against it.

I believe in the politics that wrote the GI Bill, that passed the Marshall Plan to rebuild a war-devastated Europe, that saved the Great Lakes and that through Social Security took want and terror out of old age. The kind of politics that teaches us all we owe to those who came before us and those who will come after. That each of us has drunk from wells we did not dig; that each of us has been warmed by fires we did not build.

At their worst, politicians -- like the rest of us -- can be petty, venal and self-centered. But I believe politics, at its best, can help to make ours a world where the powerful are truly more just and the poor are more secure.