Accessibility links
Classic Soul from an Unlikely Source William Darondo Pulliam (a.k.a. "Double D" or "Dynamite D") worked in the San Francisco Bay Area from the 1960s through the early '80s, but he'd also been a teenage musician. After cutting some tracks in a studio, Darondo walked away from music.

Classic Soul from an Unlikely Source

Classic Soul from an Unlikely Source

The life story of William Darondo Pulliam (a.k.a. "Double D" or "Dynamite D") remains subject to myth and mystery: His label once reported that he'd worked as a pimp for many years, a claim the singer now denies. Whatever his day job at the time, in the early '70s, Darondo recorded his sole commercial output as a musician, crafting three singles for three different studios. 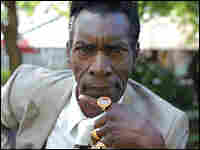 Darondo's backstory would seem likely to overwhelm the music itself -- and, no, this isn't a reference to recent Oscar winner Three 6 Mafia. In particular, "Didn't I" is almost unimaginably transcendent: a slice of sweet soul that has survived 30 years and continues to captivate. Though Darondo owes much of his style to Al Green, the track gives Green's best songs a run for their money: The song's every element is sublime, from the opening guitar line to Ray Dobard's sweeping string arrangement to Darondo's delicate vocals, which reveal a fragile vulnerability.

"Didn't I" would have remained strictly in the domain of record collectors had it not been for the efforts of some of those collectors -- Justin Torres and Gilles Peterson among them -- to bring it more mainstream attention. After Torres found Darondo, the Luv N' Haight label discovered a previously unreleased reel of music the singer had recorded. Those recordings, along with the three singles, comprise the recent Let My People Go, which is bringing Darondo's music to a new audience after three decades in obscurity.

Listen to yesterday's "Song of the Day."