Accessibility links
A Post Office Lifeline for the Homeless At most post offices, the General Delivery section is for travelers and new residents. At New York City's main post office on Eighth Avenue, it's mostly for the homeless, who need an address to get letters and assistance checks. Their address -- and safety net -- is at the back of building.

At most post offices, the General Delivery section is for travelers and new residents. At New York City's main post office on Eighth Avenue, it's mostly for the homeless, who need an address to get letters and assistance checks. Their address — and safety net — is at the back of building. 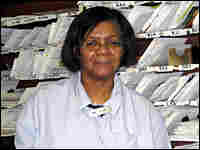 The words general delivery bring to mind thoughts of seasonal travelers or transients who pick up their mail in out of the way places. But for some people in urban centers, the post office is the most permanent address they've had in years. General delivery provides a lifeline to family and friends as well as benefits and assistance checks.

Ten thousand or so people go to the general delivery window at New York City's main post office and as NPR's Margot Adler reports, 80 percent of them are homeless.

MARGOT ADLER: The main building of the New York City post office has rising white steps, lofty ceilings and Corinthian columns. But walk a block west to 9th Avenue and there, at the back of the building, is a door to a small, somewhat shabby room with barred windows. Behind those windows, postal clerks Marilyn Rogers(ph) and Sabrine Mohammed(ph) dole out the mail, six mornings a week. There's a steady stream of customers and on check days, like the first of the month, the line can stretch out the door. Ms. Rogers asks each person to show some identification, but people forget.

MARILYN ROGERS: I need to see your I.D., Mr. Wiley. Did you apply for food stamps?

ROGERS: Did you apply for food stamps?

ADLER: Rogers dispenses advice as well as the mail and seems to know everyone's name, unless they are new. When you look around her office, it seems an impossible task. There are thousands of pieces of mail. There are a dozen boxes just for the B's; and there's one whole shelf of cubbyholes for common names like Jackson or Rogers or Hernandez or Williams.

ROGERS: Everything gets a date. We keep it for 10 days, checks for 30. If they're in the hospital or if they have to go to a program or something, they'll ask us, you know, we ask them how long are you going to be away? We'll...

ADLER: In the dingy room on the other side of the window, the service is very appreciated. Albert Haitser(ph), a trim 66-year-old man wearing a yarmulke, says he comes here four or five times a week.

ALBERT HAITSER: I'm not homeless now. I was in a shelter called Camp LaGuardia in upstate New York. And I was lucky enough to find housing in Brooklyn. I live with a roommate and I'm on public assistance. She's wonderful, Ms. Rogers and Ms. Mohammed. They're two wonderful people. They understand and they're just good people. That's all.

ADLER: What kind of mail do you get?

HAITSER: I get a lot of mail from, I have a girlfriend in Florida for the last 22 years and she writes me almost every day, so I come pick it up. You know, it keeps me hopeful.

ADLER: Nearby, Kira(ph) Williams, James Sterling and Jan Goldstein talk together. All say they're homeless. Goldstein says he sleeps on the train. Sterling picks up a letter from the Veteran's Administration. The thing about Rogers and Mohammed, they all say, is they treat you like regular people.

HANSEN: They're very nice. I like them a whole lot.

Unidentified Man: They really get to know people and they, after a while, they know you by face...

Unidentified Woman: Yeah, they're very nice. They have a lot of respect...

Woman: Yes, they respect them a lot.

ADLER: How often do you come here?

HANSEN: I get my mail once a month over here.

ADLER: And what kind of mail do you get?

Woman: No, the government don't want to give me no money, but it's all right.

ADLER: With 10,000 people, you wonder how Rogers, who's run this office for eight years, knows who everyone is. After all, there must be many William Jacksons, not to mention Jose Ortegas and Tom Smiths.

ROGERS: What we usually do is we say, look, if you have a middle initial or a middle name, tell whoever's writing to you or tell your case worker, put your middle initial in there. See, there's two Terry Lees(ph)...

ADLER: Sounds to me like you end up being a counselor, a therapist...

ROGERS: When I first came here, I didn't understand the system. But after a while, you know, then people start calling you Mama, you know, because you look out for them.

ADLER: Marilyn Rogers says it was her partner, Sabrine Mohammed, who reminded her of a deep truth.

ROGERS: We're just a couple of paychecks away from being on the other side of that window. You know, when you live in New York, New York is a hard town. Anything can happen to you. You have to treat everyone the same way you want to be treated. You have to remember that these people are human. I've talked to them, I've listened to some of their stories. We all have stories of our own. Sometimes you're going through something, and all you want is somebody to speak to you as if you were human.

ADLER: And to give you the gift not only of an address, but a little of the warmth from home.