Accessibility links
5258932 Miles Davis is among the new inductees into the Rock and Roll Hall of Fame. For most of his career, the great jazz trumpeter played music that had very little to do with rock 'n' roll. But his influence on popular music is still being felt today.

The Rock and Roll Hall of Fame welcomes its new members Monday night -- and that list will include Miles Davis. For most of his career, the great jazz trumpeter played music that had very little to do with rock 'n' roll. 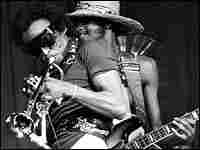 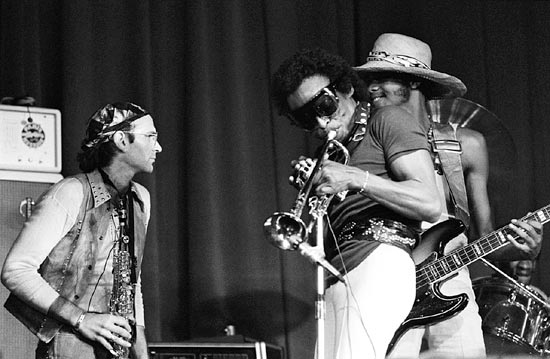 Miles Davis performs in 1973 at Olympia Hall in Paris with saxophonist Dave Liebman (seen in enlargement) and bassist Michael Henderson.

When we hear the story of how Davis earned a place in the rock Hall of Fame, we learn something about the way popular music evolved into the songs we hear today. Steve Inskeep talks with music journalist Ashley Kahn, a regular contributor to Morning Edition and one of those who votes on Hall of Fame inductees, about how Davis spanned musical genres.

Much has been written as to why Miles Davis began to merge his own style of modern jazz with the sounds and rhythms of rock: for the money, for the attention, for the reason that he simply could not deny the drive to musically explore. The best explanation of what he achieved is the music itself. His almost single-handed success in tearing down the wall between jazz and rock is captured in the three albums below, recorded by Miles' expanding and increasingly amplified group from 1969 to 1970.