Accessibility links
Cheers to Cooking with Beer Food writer Bryan Miller praises cooking with beer, a technique that is as easy as it is rewarding. He says many recipes that call for wine can be prepared with beer -- which will make the flavors more pronounced and rustic. A Belgian carbonnade is a classic example.

Cheers to Cooking with Beer

Cheers to Cooking with Beer 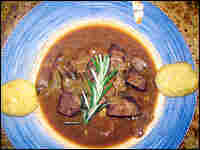 A classic Belgian carbonnade -- flavored with your favorite beer -- is no more difficult to make than beef stew. Recipes for carbonnade and horseradish dumplings below. Amy O'Connor hide caption

If you manage to wedge your way into a bibulous Irish pub for dinner this St. Patrick's Day, chances are you will find beer in more than just your mug. Traditional Irish cuisine features a host of dishes in which beer is a central ingredient. It might be lamb stew, corned beef and cabbage, beer-battered seafood, even -- and I'm not making this up -- doughnuts and chocolate cake.

While the culinary imperative of beer-worshiping Irishmen is understandable, this cooking technique is as easy as it is rewarding. Many recipes that call for wine can be prepared with beer. It will make the flavors more pronounced and rustic. (The exception is poultry, which, to my taste, is KO'd by a muscular brew).

Without launching into a tutorial on suds, I will pass along a few things you should know about beer gastronomy. Most importantly, ignore what cookbooks say about marinating with beer. Beer doesn't tenderize meat any more than lemonade (nor does wine or vinegar-based marinades). And be careful: If meat is left in the liquid too long, it will take on the grayish hue of a government-issue metal desk.

Bryan Miller is the author of 10 books about food and wine and a former restaurant critic for The New York Times. He lives in New York City.

The point of adding beer is to flavor the surface and the sauces or cooking liquids (as in a stew): the stronger the beer, the more flavorful the liquid. For example, adding a Budweiser would be like pouring in tap water. A bitter Guinness contributes a faintly bitter sensation.

A note to teetotalers: Eating a dish containing even the strongest beer will not propel you into alcoholic reverie and bad singing. Most beers have between 3 percent and 5 percent alcohol, as opposed to wine, which generally runs from 8 percent to 13 percent. Besides, virtually all of the alcohol evaporates in cooking.

For all the fuss over new Irish cooking, the best beer dishes still come from Belgium. It's no wonder: The pint-sized country is knee-deep in the stuff, producing some 800 varieties, give or take a batch of bathtub brews.

If the Belgians have the equivalent of our traditional roasted turkey, it is a savory stew called carbonnade. It is no more challenging to make than beef stew. Simply brown cubes of beef, then slowly cook onions until they are sweet and golden. Toss in some brown sugar, seasonings and, depending on the number of servings, a bottle or two of dark beer -- it can be a stout, a dark ale, a porter or any beer that is distinctive and has a bitter flavor.

The recipes for a classic carbonnade and some great dumplings to go with it are just below, but don't stop there. Beer creates superior batters for seafood, vegetables and fritters of all kinds. (Light beers, like pilsners or pale American beers, work well because they don't clash with the delicate ingredients). I have also made apple fritters and doughnuts with dark beer, and they are terrific.

Dredge the beef in flour, shaking off excess. Heat 2 tablespoons oil (or just enough to coat the bottom of the pan) in heavy large nonstick skillet or cast-iron pan over medium-high heat. Add 1/2 of the beef cubes to the skillet and brown the meat, turning from time to time -- about 5 minutes. Transfer to a heavy large Dutch oven. Repeat with remaining meat, using 2 teaspoons oil.

Steep the grated horseradish in boiled water for 5 minutes. Strain and let cool.

In a bowl, whisk the oil and eggs. In a separate bowl, combine matzoh meal and salt. Add matzoh meal to the eggs and blend until moist.

Stir in the horseradish and 2 tablespoons of water. Let stand for 30 minutes.

Bring 2 quarts of salted water to a boil and reduce to simmer. Using a tablespoon, form dumplings (about 8 large or 12 small) and poach them for about 10 minutes -- when they rise to the surface they need about a minute more cooking. Remove with a slotted spoon, and keep warm until serving.