Accessibility links
Comet Findings Raise Fiery Mystery Comets are known as the icy bodies of the solar system. But new analysis of dust brought back by a space probe shows comets are also made up of minerals forged by fire. 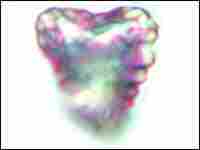 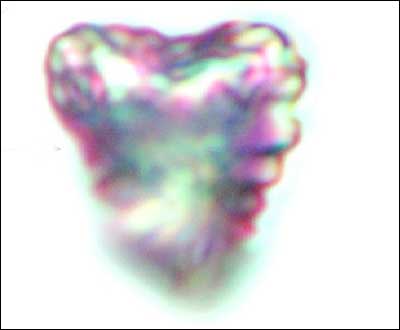 A heart-shaped comet particle, returned to Earth by the Stardust spacecraft.

Scientists studying particles of comet dust captured by the spacecraft Stardust reported a big surprise Monday. Findings from the mission are challenging assumptions about comets and how they formed.

Comets are described as clouds of ice, dust and gases, cruising the coldest fringes of the solar system. But scientists studying comet dust from the Stardust probe found minerals formed by intense heat, suggesting the minerals came from the neighborhood of the sun itself. That's the earliest discovery in what's expected to be decades of study.

The mission, designed to resolve questions about the origins of the solar system, has now added new questions to the list. How did hot minerals from the blistering core get to the frigid outer reaches? Or did the minerals come from other stars? And maybe comets aren't quite what we thought, if those icy bodies contain minerals forged by fire. The Stardust spacecraft returned to Earth two months ago with tiny particles from the comet Wild 2. 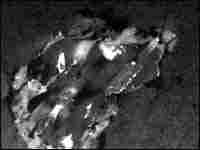 This two-micrometer comet particle, collected by the Stardust spacecraft, is made up of the silicate mineral forsterite, which can found on Earth in gemstones called peridot. NASA/JPL hide caption 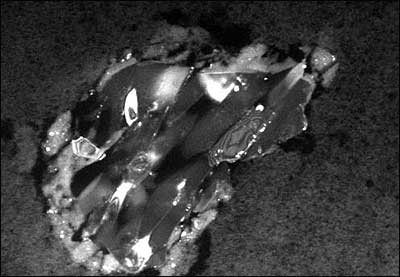 This two-micrometer comet particle, collected by the Stardust spacecraft, is made up of the silicate mineral forsterite, which can found on Earth in gemstones called peridot.

Wild 2, Portrait of a Comet 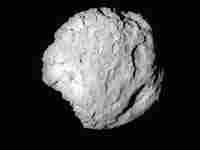 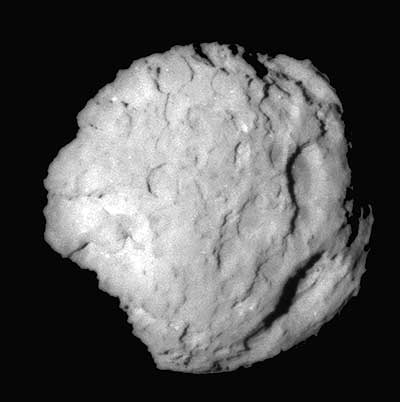 A Stardust snapshot of Wild 2 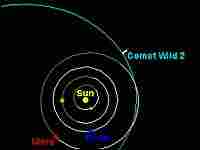 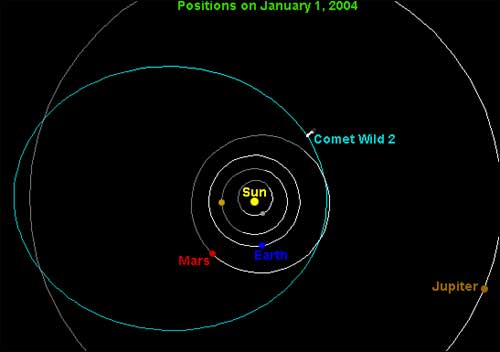 Our eyes have been on comets since Aristotle's time; he called them "stars with hair." And now, with the end of space probe Stardust's seven-year mission to Wild 2 and back, scientists are getting their first hands-on look at one of these ancient bodies. Here, a profile of the only comet to reach Earth:

Comets are small bodies that orbit the sun. Viewers on Earth recognize them by their tails: streaks of gas that become visible when the sun illuminates them. Most comets are actually too faint to be visible without the aid of a telescope, but a few each decade become bright enough to be seen with the naked eye.

Leftovers. Comets consist of materials -- ice, rocks and dust -- that formed when the planets and the sun did, more than 4.5 billion years ago. Many theorists think that comets delivered the water that led to life on Earth. Comets are also loaded with carbon, an element essential to life. In fact, comets are the most carbon-rich materials in the solar system.

Rather wild, really. Scientists had expected it to be round with a flat surface and covered in a dark, dusty coating. Instead, they found a place speckled with craters, mesas and canyons. Fly-by photos show that Wild 2 has more than a dozen jets of material shooting out from inside it, and dust churns around the comet in surprisingly dense pockets.

Because the sun hadn't baked it yet. Most comets orbit close enough to the sun that solar rays destroy bits of them with each swing by. Wild 2, on the other hand, has much of its ancient material still preserved. That's because it only recently started orbiting close to the sun; a 1974 run-in with Jupiter's gravity knocked the comet onto a path that brought it closer to the hot star.

Paul Wild is the Swiss astronomer who first spied the comet in January 1978. (To make sure Wild hadn't rediscovered a previously known comet, astronomers calculated the comet's orbit, and discovered its 1974 near-collision with Jupiter.)

The nucleus of Wild 2 -- the inner lump of ice and dust -- is about 3 miles wide. That may seem big, but the nucleus is quite small compared with the rest of the comet. When we see a bright comet from Earth, for example, we aren't looking at the nucleus, but at the stuff surrounding it, such as the much larger coma, or atmosphere, and the long, gaseous tails. The sizes of the coma and the tail increase as the comet gets closer to the sun. The coma ranges between 621 to 62,000 miles in diameter. The length of the tails range between 621,000 to 62 million miles.

Wild 2 travels about five times faster than a speeding bullet, or more than 10,000 mph. The Stardust spacecraft had to move at 13,000 mph to pass Wild 2.

Where does Wild 2 go?

Wild 2 travels an oval orbit , which astronomers call an ellipse. When Wild 2 is at one end of the ellipse, it is as close to the sun as it gets. When it is at the other end, it is far from the sun. Wild 2's orbit brings it a bit closer to the sun than the planet Mars, and the comet swings around the sun once every 6.39 years. That's a pretty short time; some comets take more than 100 years to do it.