Accessibility links
David Mamet and Shawn Ryan: 'The Unit' The latest project from playwright David Mamet teams him up with Sean Ryan, who created the FX series The Shield. The pair's new show is The Unit, about a covert military unit. 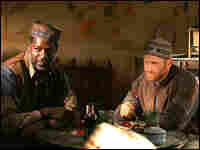 The latest project from playwright David Mamet teams him up with Sean Ryan, who created the FX series The Shield. Their new show is The Unit, about a covert military team and their lives at home and at work.

More on the Shows

The Unit, broadcast by CBS on Tuesday nights, premiered on March 7. Mamet created the show; he and Ryan are co-executive producers and writers. In a departure for a show about a highly trained and secretive special forces group, The Unit spends a portion of its time with the wives back home, who operate as a team in their own right.

Since the 1970s, David Mamet has written plays and movies from 1975's American Buffalo to the 2004 film Spartan. His inimical style -- scattershot, fast-moving lingo, often based in testosterone-fueled enterprises -- has spawned imitators and fans over the past three decades. His current collaborator, Ryan, has admitted to being a fan himself.

Ryan's other credits include creating and writing the critically acclaimed FX drama The Shield. The show starring Michael Chiklis as a renegade police detective is now nearing the end of its fifth season. In 2003, The Shield won a Golden Globe as Best Drama Series; Ryan has been nominated twice for an Emmy for his writing on the show.