Accessibility links
Allan Sherman: Beyond 'Hello Muddah, Hello Fadduh' Forty years ago, Allan Sherman topped the pop charts by replacing the lyrics of folk songs with satires of Jewish American life. And in doing that, he offered a perfect snapshot of what it meant to assimilate. 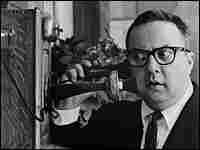 Popular music has a long tradition of ethnic humor. In the early 1960s, the tradition was being carried on by one particularly talented and funny man, Allan Sherman.

Sherman's song "Hello Muddah, Hello Fadduh! (A Letter from Camp)," a classic Jew-out-of-water song, propelled Sherman to the top of the charts. It was about the boy who didn't fit into the great American story of the woods, the lake, the poison ivy, the sports -- and the escape from parents. He didn't want to escape from them.

The musical humorist took folk songs and replaced their lyrics with satires of Jewish American life. In doing that, he offered a perfect snapshot of what it meant to assimilate. But as he released more albums, his songs began to suggest that he was uncomfortable with the role he had created for himself. Rhino Handmade has released a CD box set of Sherman's work, My Son, The Box.

This story was originally produced by Emily Botein for the Nextbook.org podcast.