Accessibility links
Guantanamo Commander Prepares to Leave Post For the past two years, Maj. Gen. Jay Hood has been commander of the U.S. military base at Guantanamo Bay, Cuba. Hood's tenure has been marked by a series of scandals, and an increasing controversy over the administration's policies on detention and interrogation. His assignment at the remote base will end soon. 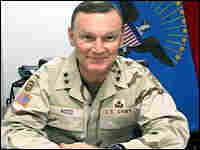 Maj. Gen. Jay Hood has spent two years in command of the U.S. military prison at Guantanamo Bay, Cuba. He leaves in a few weeks. He doesn't know yet what his next assignment will be. U.S. Navy hide caption

For the past two years, Maj. Gen. Jay Hood has been commander of the U.S. military base at Guantanamo Bay, Cuba. Hood's tenure has been marked by a series of scandals, and an increasing controversy over the administration's policies on detention and interrogation. In the next few weeks, Hood winds up his assignment at the remote base.

There was controversy over Guantanamo Bay long before Hood arrived. But that controversy was ratcheted up several notches one week after he took command, when the prisoner abuse scandal at Iraq's Abu Ghraib prison broke. Hood's predecessor, Maj. Gen. Geoffrey Miller, was implicated in the scandal. Although the abuse happened in Iraq, it didn't take long before a huge spotlight swung half-way around the world, where it landed -- and has stayed -- on Guantanamo Bay. Hood says that since then, the detention operations at the base have been continually scrutinized.

"There have been so many wild and outrageous statements that have appeared in the media which would indicate that we are an abusive, coercive, torturous sort of group," Hood says. "The idea that we have rogue guards roaming around who might beat or abuse detainees is simply absurd."

But a cloud continues to hang over Guantanamo, stemming from several damning reports regarding abusive and coercive interrogation techniques -- mostly from the early days, before Hood arrived.

In a three-part series, attorneys representing 11 Yemeni prisoners at Guantanamo Bay recount their story of meeting their clients and familes and the unexpected challenges along the way.

Some detainees who have been recently released still say they're being subjected to harsh questioning. The 52-year-old Hood, who grew up in an Army family, says that under his watch, interrogators use only techniques laid out in the Army Field Manual. Hood adds that over the past few months, interrogators haven't bothered with many of the detainees.

"A number of detainees, very obviously acting on advice of their legal counsel, have been told 'Whatever you do, don't talk to the Americans. Don't tell them anything,'" Hood says. "And that group, I think, is certainly less cooperative."

Hood says interrogators are focusing their efforts on about one-quarter of the prisoners, who have what he calls "high intelligence value." The question that often comes up is what possible relevant information a detainee could have after four years of incarceration. Hood says you'd be surprised.

"I'm not telling you that some critical piece of information that we gathered today, or this week -- or even this month -- is going to be essential in preventing some terrorist attack, some place in the world," he says. But the information being gathered helps shed light on how terrorist organizations operate -- " how they recruit, how they move around the globe, how they're financed, how they command and control operations," he says.

Hood is both passionate and slightly defensive over the persistent questions about the relevancy of intelligence being gathered. Perhaps that's why he is allowing a peek at some new evidence in a so-called evidence locker -- a long, low building that overlooks the sparkling blue waters of the Caribbean. This is the first time a journalist has been allowed inside. Metal shelves, crammed with dark green boxes fill the cavernous rooms. In them are more than 120,000 documents: telephone records, captured notebooks with all sorts of engineering data in them, both real and forged money, passports.

General Hood says when the detainees were captured about four years ago, the evidence was gathered up and stuffed into garbage bags and boxes. "It was hastily inventoried, stacked up, sealed and then transported here to Guantanamo," he says. "Frankly, it's just in the last year that we've been able to take a closer look at what we've got here."

Hood says what they're finding is that some of the detainees they thought were low-level players in fact held more important positions in the Taliban and al Qaeda. Hood is unabashedly unapologetic about Guantanamo. He says if he felt detainees had no intelligence value or could all be safely integrated back into their societies, then he would tell his chain of command.

"That's not what I'm seeing," he says. "What I'm telling you is there are a group of men here who are extremely well-educated, were very familiar with the West. Many of them have extraordinary financial resources back home, and many of them have looked us in the eyeball and said, 'When I get out of here, I'm going to kill you.'"

But there are chronic complaints that some of the detainees being held are innocent goat farmers or the like and have not been given their due legal process. Only 10 of the nearly 500 remaining prisoners have been charged. For Hood, solving those type of issues is -- in military parlance -- "out of his lane." He is dealing with detainees finding their own way to protest their open-ended detentions. Since August, many detainees have staged a hunger strike.

Hood has come under sharp, widespread criticism for his decision to force feed the detainees with the use of a restraining chair. Hood defends the decision, saying he would not allow one of the detainees to become a martyr, thereby creating more pressure to close the camp.

"Imagine, if you will, if we simply allowed them, contrary to U.S. law, to kill themselves," Hood says. "What would that mean to the rest of the Islamic world? You have Muslim men dying at Guantanamo Bay."

Hood will leave this and other problems behind when he wraps up his posting in a few weeks' time. He still has not been told where he heads to next. 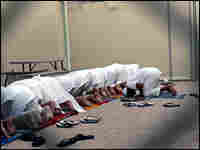 Life Inside Guantanamo Bay: Detainees pray inside of Camp Four during one of four prayer calls. U.S. Navy hide caption