Accessibility links
Commemorate Caesar: Take a Deep Breath! : Krulwich Wonders... It may have slipped your mind, but today is the 2050th anniversary of the assassination of Julius Caesar. In his final moments, Caesar let out a big gasp -- and chemists say molecules from Caesar's breath have made their way around the world. So take a deep breath... 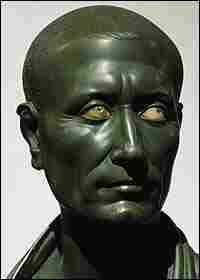 Though you may not have noticed, today is the 2050th anniversary of Julius Caesar's assassination.

Most of us have a vague sense of what happened that day. Caesar was, of course, a great conqueror. He was very popular with the ordinary folks in Rome, but not so popular with a small group of senators who feared that at any moment he would make himself an absolute dictator.

Several listeners wrote in saying that technically this is the 2049th anniversary of Caesar's death. Our correspondent, Robert Krulwich, has this response:

2050th birthday. This came up when we celebrated the millennium on Jan. 1, 2000. That New Year's Eve was the big one, with all the hoopla, the big TV coverage. Looking at the 2000 number, people just — in an odometer kind of way-thought "This is it!"

However, if you count backwards, what you will find is there was no year "0".

So, even though the arithmetic (the year 2000 or, in our case, 2050) looks like a nice round anniversary, technically we are entering the 2050th year, not completing it.

There were people who said the millennium didn't begin until Jan. 1, 2001; those same people would say the 2050th doesn't really finish, and shouldn't be celebrated, till next year.

Technically, they have a point.

Culturally, I think we celebrate on the round numbers.

The senators, including his friend Brutus ("Et tu?"), conspired, invited him to the Senate, gathered round and stabbed him over and over. Caesar, mortally wounded, exhaled and died.

And it's not like Caesar hadn't been warned. Soothsayers had told him to "Beware the Ides Of March" -- "ides" meaning the middle of the month. But he paid no heed.

That's what most people know.

Here's what chemistry students know: For some reason, Caesar's dying breath, his last exhalation, has become a classic teaching tool in high school and college. When Caesar exhaled, he released an enormous number of "breath" molecules, mostly nitrogen and carbon dioxide. It's a very, very big number says Dan Nocera, chemistry professor at the Massachusetts Institute of Technology (MIT). By Nocera's calculation: .05 x 6 x 10 to the 23rd.

Over the years, a number of scholars have tried to figure out what typically would happen to all those molecules. They figured some were absorbed by plants, some by animals, some by water -- and a large portion would float free and spread themselves all around the globe in a pattern so predictable that (this is the fun part) if you take a deep breath right now, at least one of the molecules entering your lungs literally came from Caesar's last breath.

That's what they say.

If you look around the Internet, you will find professors who say we take in three of Caesar's molecules per breath, or eight, or 10. It all depends on your assumptions about the size of a breath, the size of the atmosphere, the location of the breather (on a mountain, or at sea level?)

Even though these calculations apply to any breath exhaled long ago -- Shakespeare's, Cleopatra's, Lincoln's, your great-great-grandma's -- you may still want to take a moment today to share with Caesar. Just breathe in and share his molecule.