Accessibility links
Family Ties Source of Strength for Elderly Caregivers Clarice Morant has been taking care of her sister for more than 20 years, and her brother for six. It's a natural role for a big sister, even if in this case, the big sister is 101. 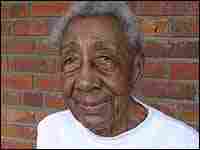 Clarice Morant, 101, outside of her Washington, D.C., home, where she cares for her elderly brother and sister. Joseph Shapiro, NPR hide caption 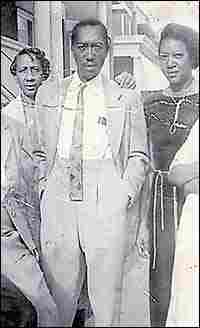 Older people do a lot of caregiving for elderly family members and friends. Among Americans 75 and older, one in five say they do some caregiving. And sometimes it’s the very old who help out -- like Clarice Morant. She's 101.

In Morant's small and tidy living room, photographs of family crowd the walls, tables and shelves. Morant coaxes her elderly brother, Ira Barber, to get up off the couch for lunch.

Barber can't speak, as the result of a stroke. He's a handsome man sharply dressed in gray pants and matching shirt. Just a few steps away is the dining room table. At the head of the table there's a plate of chicken, collard greens and macaroni and cheese.

Morant can't get her brother to pull himself up on his walker and take those few steps to the dining room. "Your dinner will get cold if you don't eat now," she tells him. "Come on, honey. Come on, eat something."

Morant lives in her brick row house with her brother and her sister, who's in the next room, in a hospital bed.

But can a 101-year-old woman give good care? And do it without putting her own health in danger?

Morant cooks for her brother and sister. She does their laundry, bathes them and gets up in the night to turn and change them.

She's a small woman. But she stands up straight. Her friends and family don't call her by her given name, the call her Classie.

According to a recent study by the Urban Institute, people 75 and older provide more hours of caregiving than people in any other age group.

After her husband died, Morant moved into this house, which belongs to her sister. Laney, her sister, is blind and in the terminal phase of Alzheimer's disease.

"I've been taking care of my sister for 20 years, and my brother for about six now," says Morant.

Morant says there's a simple reason why she does the hard work of caregiving: "I made a promise. To the Lord. If he gives me the health, the strength, the life to do for them. Take care of them, keep them from going in a home. I would do it. And as long as he gives it to me, I will give it to them."

The lifting, pulling and all-through-the-night work of caregiving can take a physical toll on anyone.

Last fall, Morant got sick and was hospitalized for congestive heart failure.

Other family stepped in to take over the caregiving: a goddaughter from Baltimore, and her brother's son and wife, who came to town from California.

When Morant got out of the hospital four days later, it wasn't clear whether she'd regain the strength to ever again care for her brother and sister.

"She still maintained that schedule where she'd get up three to four times a night," says Monica Thomas, a social worker for a medical program that cares for Morant's brother and sister. "I didn't think there was any way she could do that."

Thomas arranged for an aide to come in on the overnight shift, and after six weeks, Morant bounced back.

"She got better," says Thomas. "She did, miraculously. She improved. She really did."

Today, Thomas worries how long Morant can continue to provide good care to her brother and sister.

"It would be difficult for any person to do this," she says, "much less when you're 101 and have some medical conditions of your own. But it's also hard to tell whether or not the fact that she has this purpose is what's keeping her alive at 101 and what motivates her to get better and stay as strong as she possibly can."

Morant and her siblings all sleep just steps away from each other. Morant's fold-out couch is an arm's length from her sister's hospital bed. Their brother is steps away, on the other side of a thin glass door.

"Well, I don't get too much sleep," says Morant. "Some nights I sleep more than others. Some nights, I don't think [Laney] feels too good. She's restless. She's making noises. She'll call me. Either one of them makes a noise, I hear it."

Government programs, family and friends help them get by.

On weekdays, Morant gets important assistance from in-home aides. One comes three hours on Monday, Wednesday and Friday to care for her sister. Another aide cares for her brother, 12 hours a day, Monday through Friday.

There's also a neighbor who helps with meals and cleaning.

But at night and on Saturdays and Sundays, Morant is on her own, the lone caregiver for her sister and brother.

"I think they're getting superb care at home," says Dr. George Taler, Laney and Barber's doctor. Taler says his patients who go to nursing homes tend to die in about two years. Morant's brother and sister have lived much longer.

"Miss Laney is really at the end stages of Alzheimer's disease, and has been maintained at home now for many years," says Taler. "She is totally dependent and needs to be fed. She's been bedbound for more than 10 years. And Mr. Barber's had progressive strokes. The fact is, he's not deteriorating as fast as one would expect given his age and his illnesses."

Taler says the difference is Morant's close attention. The way -- during the day -- she pulls her sister to a sitting position. Just sitting up keeps muscles strong. The way Morant gets up at night to clean her brother and sister and help them move their bodies in bed. As a result, neither has gotten a bedsore. Bedsores, which are painful and sometimes even deadly breakdowns of the skin, can be common for such frail, elderly people.

Taler says it's not uncommon for family members -- old or young -- to do even most of the medical care.

"This happens with families. They couldn't conceive of themselves picking up on things like wound care or managing people on vents or feeding tubes. But when the need is there, they step up and find the ability to do that," says Tayler.

Morant's brother and sister can no longer speak. They can't say how they feel about their sister's continued devotion. And Morant -- at 101 -- says she isn't sure what they'd say if they could.

"I really don't know," but probably, she adds, they'd say "thank you."