Accessibility links
Congress Sets New Federal Debt Limit: $9 Trillion Faced with a potential government shutdown, the Senate votes to raise the nation's debt limit for the fourth time in five years, to $9 trillion. That's about $30,000 for every man, woman and child in the United States. The debt now stands at more than $8.2 trillion. 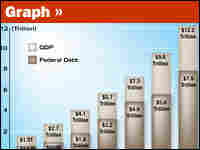 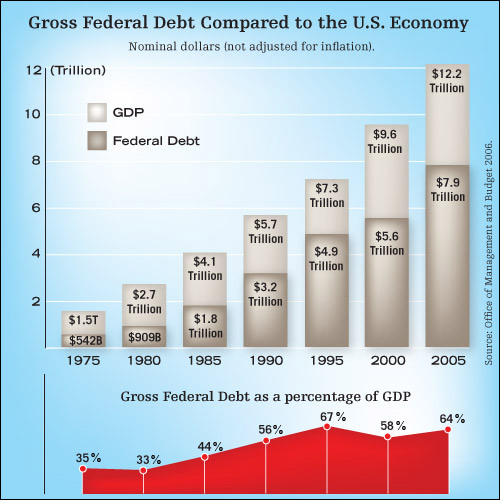 Faced with a potential government shutdown, the Senate votes to raise the nation's debt limit for the fourth time in five years. The bill passed by a 52-48 vote, increasing the ceiling to $9 trillion. The bill now goes to the president.

The debt now stands at more than $8.2 trillion.

Like many cash-strapped Americans who have maxed-out credit cards, the federal government has hit its limit for borrowing funds to keep operating. If the limit isn't raised, the government likely will run out of borrowing authority within days, risking a shutdown.

When President Bush took office five years ago, the national debt was at $5.6 trillion; since then, big budget surpluses have collapsed into huge deficits, and the debt has shot up nearly 50 percent.

Few lawmakers, though, wish to be on record as authorizing more debt -- the House goes so far as to hike the limit automatically. And Senate Democrats are telling their Republican counterparts not to expect any help from them, particularly in an election year.

If any amendments are attached to the Senate's debt measure, the House would be forced to vote on raising the limit -- the last thing many lawmakers seeking re-election want to be on the record as doing.