Accessibility links
National Security Report Highlights Iran Threat The White House releases a new national security strategy document. It affirms President Bush's doctrine of pre-emptive war. And it singles out Iran as the country that poses the greatest challenge to the United States.

The White House releases a new national security strategy document. It affirms President Bush's doctrine of pre-emptive war. And it singles out Iran as the country that poses the greatest challenge to the United States.

The White House releases a new national security strategy today. The document affirms President Bush's doctrine of preemptive war against hostile states or terrorist groups, and it singles out Iran as the country that poses the greatest challenge to the United States. National Security Advisor Stephen Hadley is expected to offer more details in a briefing later today. Joining me now to talk about the security strategy is NPR's White House correspondent, Don Gonyea. Good Morning.

MONTAGNE: Don, this is the first strategy document released in more than three years. Why now?

GONYEA: Right. It is also a required document. It's worth pointing that out. But really, it does not represent any big change in terms of administration policy. In terms of the centerpiece of the policy, it is still, as you said, very much the focus on preemption. It is very much a post-9/11, 2001 mindset. The president has said repeatedly that the U.S. cannot sit by while threats gather around the world, and that's what this reflects.

MONTAGNE: Iran is interesting, though, in the way it has been positioned in this document. There has been a great emphasis on diplomacy regarding Iran.

GONYEA: It's interesting, because Iran, again, is seeking nuclear weapons, according to the U.S. Though, Iran says it is not seeking those weapons, that its nuclear program is for peaceful purposes only. And, while saying that Iran cannot have nuclear weapons, that that will not be allowed, this document does say, yes. Iran is the biggest threat that the U.S. faces, that the U.S. will not sit by. It even mentions potential confrontation, but that confrontation is mentioned only in the context of the diplomatic effort that is underway, using the aid of the European Union and the Russians, that the U.S. is actively involved in. And it says that, you know, confrontation would only come if that diplomacy should fail. But again, the focus here really, really is on Iran in this document.

MONTAGNE: North Korea, on the other hand, says it has nuclear weapons already. What's the U.S. strategy regarding that country.

GONYEA: And some see that as a contradiction within the administration's foreign policy. What the administration says is that every country, every situation has to be looked at on its own, differently. And yes, Korea has announced that it has nuclear weapons. It also has the kind of army, and it's located in a place in the world where the administration has been reluctant to ever, ever talk about confrontation as it relates to North Korea. And while it is saying in this document that North Korea does need to change its policies, that it is a real threat, the U.S. is really committed to those 6-nation talks, which include China and Japan and South Korea and the U.S. and Russia--Korea's neighboring countries, to really convince North Korea that, if it is going to be a citizen of the world, an accepted part of the world community, with all of the benefits that come with that, that it needs to abandon its nuclear weapons program.

MONTAGNE: And what other trouble spots does this strategy document identify, and what does the White House say is the threat that they pose to the United States?

GONYEA: Well, there's a laundry list, and let's start with that broad heading of tyrannies that remain around the world. In addition to North Korea and Iran, it cites Syria and Cuba and Belarus and Burma and Zimbabwe, and quoting the document, it says, "All tyrannies threaten the world's interests, and fReidom's expansion." It also cites Russia in what it calls, Regrettable trends toward diminishing commitment to democracy, and it talks about Hamas, the recent winners of the Palestinian elections, saying it must abandon its position of terrorism, and its approach toward Israel if it hopes to be able to engage in a dialogue there.

MONTAGNE: Don, thanks very much.

GONYEA: All right, my pleasure. 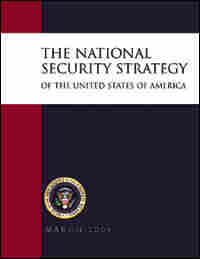 The report says diplomacy is strongly preferred in halting the spread of nuclear weapons, and points to Iran as the potential biggest future threat for the United States.

"The goal of our statecraft is to help create a world of democratic, well-governed states that can meet the needs of their citizens and conduct themselves responsibly in the international system," says the report, which is signed by the president. "This is the best way to provide enduring security for the American people."