Accessibility links
Book Touts 'Colleges that Change Lives' For thousands of nervous parents, a popular college guide listing little-known, but highly-regarded, campuses has attracted a cult following. The Evergreen State College outside Olympia, Wash., is one of the schools listed in Colleges That Change Lives: 40 Schools You Should Know About Even If You're Not a Straight-A Student.

For thousands of nervous parents, a popular college guide listing little-known, but highly-regarded, campuses has attracted a cult following. The Evergreen State College outside Olympia, Wash., is one of the schools listed in Colleges That Change Lives: 40 Schools You Should Know About Even If You're Not a Straight-A Student. 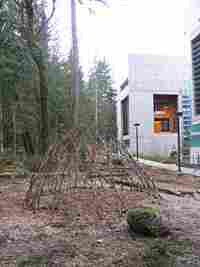 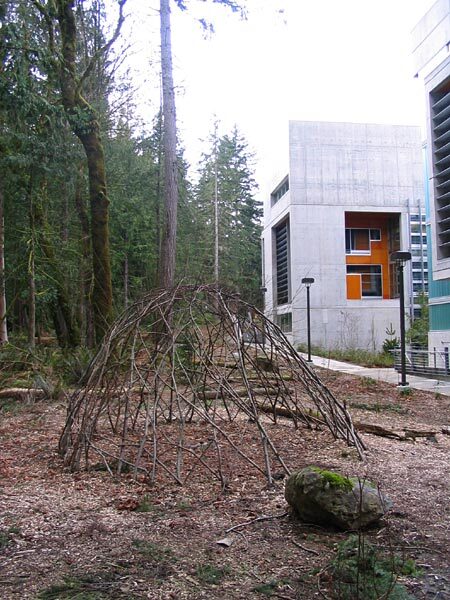 A geodesic dome outside a building at Evergreen State College, built from fallen branches.

Each year, hundreds of thousands of high school seniors apply to top universities, only to be turned away. But a college admissions guru, who's 95 years old, has attracted a cult following with this message: the ivy league is overrated. Instead, choose from one of the small colleges he recommends.

NPR's Elaine Korry visited one of them: Evergreen State College in Washington State.

Here's what Author Loren Pope had to say about this place: The campus is unlike any other: modern, concrete buildings and even the open spaces seem lost in the great evergreens. The majestic setting gives the sense of being one with nature and everything seems natural and unaffected.

And that recommendation is enough to bring parents from all over the country to this quiet campus a few miles south of Olympia.

KORRY: On Pope's advice, Polski recently made the drive north with her daughter Sarah, who's 16.

Ms. POLSKI: We are trying to avoid some of the, you know, let's get into the best school possible, and more trying to find what is the school that's the best fit.

Ms. SARAH POLSKI (Prospect, Evergreen State College): I kind of had that experience going to like a prestigious public high school and having it not be what I necessarily wanted.

KORRY: For families like the Polskis, Pope's book is a bible, crammed with data and heartfelt prose, it sells a simple idea.

LOREN POPE (Author, Colleges That Change Lives): The name-brand schools are like the emperor: they have no clothes.

KORRY: Pope says even students with a C average can excel at the right college. But finding the right fit means looking beyond status or rankings.

Mr. POPE: There are a lot of colleges that nobody ever heard of that out- produce the Ivy's, the major research universities and the Big Ten in the percentage of people who become the nation's scientists and scholars.

KORRY: Pope has profiled 40 of these little gems in his book 'Colleges That Change Lives.' They range from Allegheny and Meadville, Pennsylvania to Whitman in Walla Walla, Washington. Since 2000, the book sold more than 100,000 copies.

KORRY: Several dozen families fill a conference room in the admissions office where counselor Kate Hardin talks up what Evergreen has to offer.

Ms. HARDIN: So we have approximately 4,000 students. We have 3,000 feet of beachfront, which is one of the unique components of our campus.

KORRY: Many parents arrive here clutching their copies of Pope's book open to page 273 where he describes professors and students committed to making a difference. High school junior Eric Morance(ph) came all the way from Connecticut based on what he read.

Mr. ERIC MORANCE (Prospective Student): I think the most important thing in looking for colleges is finding one that can help you pursue what you're interested in and not necessarily get you into a good job later.

KORRY: It's a message not all of the students on tour believe. Prianga Baghat(ph) from Memphis, Tennessee is already thinking about graduate school and then a six-figure salary. She's not sure colleges that change lives will get her where she wants to go.

Ms. PRIANGA BAGHAT (Student): Most of the schools that are in there are not very prestigious. Some of them are. Hampshire is. Reid is. But, the other ones, I imagine you can get a good education there, but I don't really know how it would distinguish you amongst other people.

KORRY: Baghat concedes she doesn't have the grades for top ranked schools so she may wind up at one of Pope's. Her dad's a college professor and he loves the book so much she feels like she's grown up with it.

KORRY: Fans of the book will have a completely updated version this summer. As in earlier editions, a few well-known names will pop up--Antioch and Beloit--but by and large, these schools are pretty obscure which Pope says is part of what makes them great. Elaine Korry, NPR News. 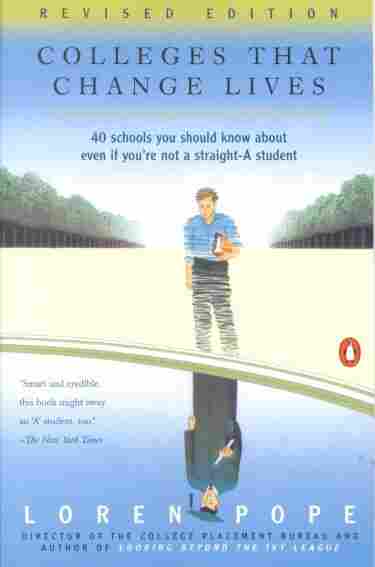