Accessibility links
Doubt Cast on Ivory-Billed Woodpecker Video It is the Zapruder film of birding: Four seconds of what some scientists say is proof that the ivory-billed woodpecker is not extinct. Now, skeptics have deconstructed every frame and say the bird caught on film is just a common pileated woodpecker. 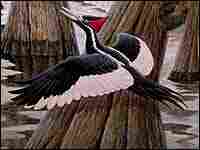 An artist's image of an ivory-billed woodpecker. The bird is thought by some to have gone extinct more than 60 years ago. John A. Ruthven hide caption 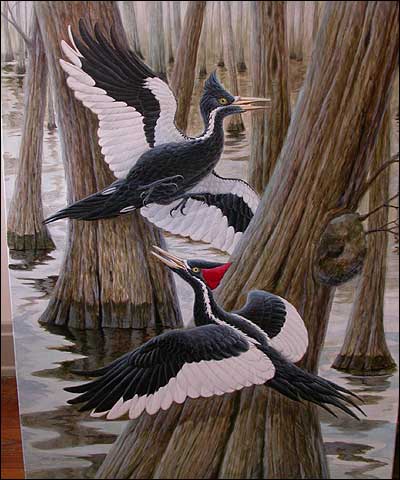 An artist's image of an ivory-billed woodpecker. The bird is thought by some to have gone extinct more than 60 years ago. 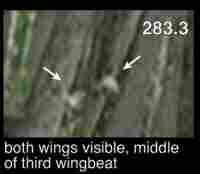 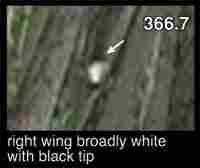 It has been almost a year since scientists announced that they had seen -- and videotaped -- an ivory-billed woodpecker in Arkansas. The famous bird was not extinct as widely believed, they said. Since then, searchers have raised millions of dollars to confirm the discovery, and millions more to protect the forests and swamps where the bird was seen.

But skepticism is growing. Some experts say the video doesn't show an ivory-billed woodpecker at all, but a common cousin of the bird.

This type of debate is common in science. Someone makes a big claim, publishes the evidence, and then skeptics take whacks at it.

In this case, the evidence is a four-second video taken in 2004 from a canoe in Arkansas' Cache River National Wildlife Refuge. It shows a perched bird partly behind a tree trunk. The bird then takes off and flies away from the camera.

It has become the Zapruder film of the birding world (Zapruder being the man whose home movie of the Kennedy assassination kept analysts busy for decades).

Scientists at Cornell University say the pattern of white on the bird's wings is unique to an ivory-billed woodpecker.

Skeptics say it's just a pileated woodpecker, which is a lovely bird, but as common as rice at a wedding.

Now David Alan Sibley, an author of famous birding books, offers his take. He says the bird in the video isn't really perched on the tree.

"We're saying the bird is behind the tree, and it has lifted its wings, spread its wings completely over its back and is starting to flap its wings as it pushes away from the tree," he says.

Also, as the bird flies away, Sibley and his fellow critics say the white seen in the video is really on the underside of the wings.

"As the wings are flapping down, they are going to be twisted, so that what you see from behind is the underside of the wing," Sibley says.

John Fitzpatrick, who runs Cornell's laboratory of ornithology, disagrees. Fitzpatrick is currently in the Big Woods of Arkansas, searching for the bird.

"We happen to think that they're incorrect," Fitzpatrick says.

The skeptics, he says, are arguing that there's a "huge twist in the wing, and that the bird is actually sort of seen rowing backwards. That's not how birds fly."

Fitzpatrick adds that the critics can't explain away, either, the way the bird flies.

"It's clear that that bird is flapping at a faster rate than has ever been recorded for a pileated woodpecker."

The debate is being waged -- frame by frame -- in the pages of scientific journals, most recently in the latest issue of Science magazine. But anyone can watch it on the Web and decide for themselves.

Ted Floyd, editor of Birding magazine, says most birders are fascinated but on the fence.

"Birders can really start to get pretty heavy into questions of probability and the limits of knowledge, and the conservation and management ramification of the discovery. So I don't think it's just 'Is it there or isn't it there?'" Floyd says.

One thing both sides agree on: They hope the bird is there. But so far, there haven't been any sightings confirmed with photos.