Accessibility links
Joshua's Tough Questions for His Mother Joshua Littman was diagnosed with Asperger's Syndrome, a form of autism, when he was 5. When he was 9, he joined MENSA. Recently, Joshua, 12, wrote a list of questions to ask his mother. 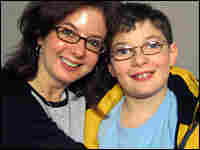 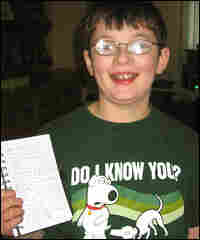 Joshua Littman, with the questions he wrote to ask his mother. The Littman Family hide caption

When he was 5 years old, Joshua Littman was diagnosed with Asperger's Syndrome, a form of autism. But the condition that has robbed him of many social skills has also played a role in Joshua becoming an honor-roll student at 12.

Born in Dorset, England, Joshua and his family moved to the United States soon after his diagnosis. When he was 9, Joshua became a member of MENSA.

His mother, Sarah Littman, is a journalist and an author of children's books. She describes children with Asperger's as "born without social genes."

They can come across as eccentric, and often develop obsessions -- in Joshua's case, animals.

Confronted with the chance to interview his mother at a StoryCorps booth, Joshua eschewed the prepared questions that many participants rely on, and instead created his own. His questions touch on everything from his mother's past to how she really feels about him.

1) What do you think of today's young people? Have they deteriorated?

2) How does getting married feel?

3) Do you think the U.S. is becoming a mess of a country?

4) Do you have any mortal enemies?

5) Have you ever felt that life is hopeless?

8) Is there anyone you wish were dead?

9) What do you think is the greatest country in the world?

10) Have you ever thought you couldn't cope with a child?

12) Do you think a lot of people are sexist?

13) Why does it seem like everyone loves Amie [Joshua's sister, 9] more?

* And one last question, asked when it came to mind:

14) Have I met the expectations you had for me when I was born?

StoryCorps is the oral history project collecting stories around the nation, as friends and family members interview each other in a mobile recording booth. Copies of the conversations go to the Library of Congress -- and excerpts are played on Morning Edition each Friday.