Accessibility links
Parker, Stone Respond to Pulling of 'South Park' Episode The creators of South Park respond to the pulling of a rerun of the episode that led to Isaac Hayes departing the show. They admit to being agents of Xenu. 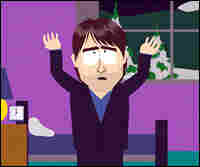 On Wednesday night, Comedy Central pulled a repeat of the episode of South Park that caused Issac Hayes to quit the show. That episode made fun of Scientology and featured Tom Cruise refusing to come out of the closet. Reportedly, Tom Cruise put pressure on Viacom, the parent company of Comedy Central. Trey Parker and Matt Stone, the creators of South Park, released this statement through their lawyer:

Scientology, you may have won THIS battle, but the million-year war for Earth has just begun! Temporarily anozinizing our episode will NOT stop us from keeping Thetans forever trapped in your pitiful man-bodies. Curses and drat! You have obstructed us for now, but your feeble bid to save humanity will fail! Hail Xenu!!!

And again, just so you know, I violated all of my principles and actually called the lawyer himself and asked if this was their real statement. It is.