Accessibility links
The Concert Movie, Then and Now The concert movie is back: Note Dave Chappelle's Block Party and Neil Young: Heart of Gold. Film commentator Elvis Mitchell says the films stand up well to classics such as Woodstock.

Listen
The Concert Movie, Then and Now

The concert movie is back: Note Dave Chappelle's Block Party and Neil Young: Heart of Gold. Film commentator Elvis Mitchell says the films stand up well to classics such as Woodstock. 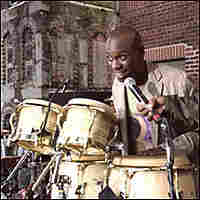 Joni Mitchell and Neil Young perform in a scene from the 1978 film of The Band's long goodbye, 'The Last Waltz.' United Artists hide caption

After a long, quiet stretch, the concert film is back on the big screen. There's the concert documentary Neil Young: Heart of Gold; Coachella: The Movie, which is sort of a Who's Who in alternative rock from the last six years of the Coachella Valley Music and Arts Festival; and comedian Dave Chappelle's Block Party.

Mr. DAVE CHAPPELLE (in Block Party): Ain't nothing like a James Brown hit to set the mood. Hit me.

WERTHEIMER: Makes you think of the good old days.

Mr. ARLO GUTHRIE (Singer/Songwriter): I don't know, like, how many of you can dig how many people there are, man. Like, I was rapping to the fuzz, right? Can you dig it? Man, there's supposed to be a million and half people here by tonight. Can you dig that? New York State Throughway is closed, man.

(Soundbite of The Last Waltz)

Mr. RICHARD MANUEL (The Band Member): And it was right in the middle of the whole psychedelia, chocolate subway and marshmallow overcoat, we decided just to call ourselves The Band.

WERTHEIMER: You just heard Arlo Guthrie at Woodstock; and The Last Waltz, about the final concert of The Band; that was Richard Manuel; and the Talking Heads movie, Stop Making Sense.

Our film commentator Elvis Mitchell joins us from the New York bureau.

WERTHEIMER: So what do you think brings concert films back to the big screen right now?

MITCHELL: I think that there are stories to tell, that Dave Chappelle took his lead from the great concert movie Wattstax, which is one of the few concert movies of the 70s about black acts, about R&B acts, that feature Richard Pryor and doing some of-the-moment, really contemporary, up-to-the-minute comedy bits, talking about politics.

WERTHEIMER: As part of our historical survey, Elvis, we do have -- we have a clip of Wattstax, which we can play for you.

Mr. RICHARD PRYOR: (in Wattstax): The line up, see the line up, man, was a thing that I used to, in Peoria, Illinois, it's a small town so I'd be in a line up for entertainment on Saturday nights because there wasn't nothing to do. You know what I mean? Because ugly white women used to say they got raped by (bleep) it was a lot of fun unless you got picked...

WERTHEIMER: That was Richard Pryor in Wattstax. So why is Block Party so special?

MITCHELL: Chappelle kind of brings his own point of view to Block Party. September 18, 2004, because I was supposed to go that's why I remember the date, but a day of infamy for me, a day of heartbreak, and it featured an amazing array of guests, all of whom were speaking their minds about what it is they do, and the guest lists goes from Kanye West and Common and Mos Def and the Roots to the reunion of the Fugees.

WERTHEIMER: Why don't we play a little clip? This is Dave Chappelle driving around Brooklyn with a megaphone.

MITCHELL: The megaphone in there it kind of harkens back to all those old concert films, and they're calling out to people. It's kind of reminiscent of Arlo Guthrie talk about -- you almost expect Chappelle to start saying something about brown acid as he starts speaking through the megaphone, but he generates excitement. And part of the fun of the movie is that director Michel Gondry, who's done a lot of music videos, he just uses a single camera to capture the stuff on the streets.

WERTHEIMER: Now, another and sort of different recent concert film, Neil Young, Heart of Gold, was directed by Jonathan Demme, who also made Stop Making Sense. And this film shows Neil Young performing in Nashville in the wake of his recovery from a nearly fatal brain aneurysm, and I've heard him say that he performs almost all new songs for this, the album, Prairie Wind, which is something that he wrote to sort of gather up some of the threads of his life.

MITCHELL: And Neil Young is a great storyteller and has essentially had a concert film made of every concert tour he's done since he started doing concerts, and most of them never see the light of day. But this time he went out and got Jonathan Demme, made sure that he wanted to make into a much bigger deal, and this one's about survival.

Mr. NEIL YOUNG: (Singing) Old man take a look at my life, I'm a lot like you. I need someone to love me the whole day through...

WERTHEIMER: Now, the Coachella music festival movie takes us through the past six years of the fashionable Coachella Valley Festival. Bands like the Arcade Fire, Belle & Sebastian, Bjork, Bright Eyes, the Flaming Lips, they're all in this film. This festival might be the biggest outdoor music festival in the United States.

MITCHELL: Coachella, having been to that festival, is not nearly as communal as I imagined Woodstock must've been. On the other hand, there's more percent of choice in that. I means there's a big difference between Arcade Fire and Belle & Sebastian and Bjork. They're all very different kinds of acts. But I think what Coachella shows is that pop is no longer monolithic in that way that it was in a lot of the concert movies where it was really a statement about a group of people getting together and hoping that their point of view, their sensibility was disseminated to everybody. What Coachella shows us is that there are a number of disparate sensibilities and tastes and they should all be brought together, and this film does that.

(Soundbite of Coachella: The Movie)

Mr. BLACK FRANCIS (Pixies): (Singing) Where is my mind...

MITCHELL: Well, I like them all. It's just like having a subscription to the Columbia Record Club right here in front of me.

WERTHEIMER: Okay. Elvis Mitchell is host of KCRW's The Treatment. Elvis, thank you.