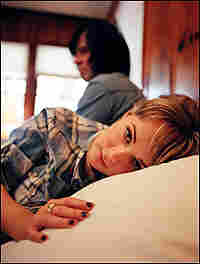 Isobel Campbell, with Mark Lanegan in the background. hide caption

Take a few simple chords, stir in a cello solo or two, add some percussion instruments reminiscent of a old western film score and top them off with two voices -- one made rough by experience, the other softened by its youth.

Now you have the sound recipe for Isobel Campbell's new CD with Mark Lanegan, Ballad of the Broken Seas.

They are an odd couple. Campbell is a cellist and the angelic vocalist formerly of the Scottish indie pop band Belle and Sebastian. The deep-gravel howl belongs to Lanegan, the former frontman of the Seattle grunge band Screaming Trees.

After splitting up with Belle and Sebastian in the spring of 2002, Campbell decided to try her luck as a single act. The Glasgow native is in the United States this month for her first solo tour, and Liane Hansen caught up with her.