Accessibility links
Feeding the World with Deep-Sea Fish Farms A Hawaiian firm has become one of the first to launch deep-sea fish farms. In waters some 200 feet deep, Kona Blue is raising fish in giant netted cages. The company says this type of large-scale, open-ocean aquaculture may be the answer to the world's over-fishing woes.

The world's ever-growing population is eating more and more fish and the oceans can't keep up. Fishing has depleted wild stocks of tuna, swordfish, cod and many other species. 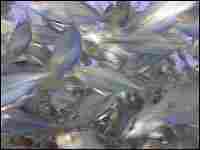 A school of fish raised in a deep-sea Kona Blue fish farm off the coast of Hawaii. hide caption

Some scientists say the answer is a massive growth of fish farming -- a so-called "blue revolution" to help feed the planet. So far, fish farming has occurred on land or in protected harbors. But some see a future with large-scale off-shore fish farms in waters hundreds or thousands of feet deep.

One of the first companies venturing off-shore is Hawaii-based Kona Blue. It is raising fish in giant, netted cages off the coast of Hawaii, submerged in waters some 200 feet deep. Some scientists say that farming in such deep waters can avoid environmental concerns raised by fish farms close to shore. If you get too many caged fish in a harbor, the fecal matter will pollute it. But offshore at the Kona Blue site, powerful ocean currents constantly flush so much water through the farm that Kona Blue reports it can't detect any change in nutrient levels up-current versus down-current of the farm.

Scroll down to read about environmental issues involved in running a fish farm.

A big challenge, of course, for off-shore aquaculture is designing a fish farm that can survive the open ocean. Anyone who read the book or saw the movie The Perfect Storm got a sense of the forces that are unleashed on the ocean's surface.

The trick has been to sink the giant cages down well below the surface of the water and tie them to a series of anchors using high-strength polymer ropes. The only things exposed above water are several large metal feed buoys. One experimental fish farm off the coast of New England has survived several northeasters with 40-foot waves and high winds.

'Going Green' with the Blue Revolution 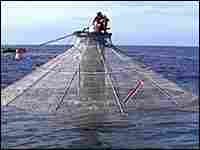 Fish farms have been a boon to fish lovers around the world. About 30 percent of the seafood eaten in the United States this year will come from so-called "aquaculture" farms, most of them in Asia.

But fish-farming operations, which traditionally operate near the shore, have raised environmental concerns. According to one study, a fish farm with 200,000 salmon releases nutrients and fecal matter roughly equivalent to the raw sewage from 20,000 to 60,000 people.

Kona Blue's Neil Sims says inshore farming has become much cleaner in recent years. And he and other scientists say farming far offshore -- in waters hundreds of feet deep, with strong currents -- goes a long way toward diluting any waste, making it a very appropriate place for large-scale aquaculture.

Some environmentalists, though, are still concerned about the environmental controls in new federal legislation that would set up a regulatory framework for open-ocean aquaculture. Rebecca Goldburg of Environmental Defense, an advocacy group, worries that, in its current form, the legislation leaves too much environmental regulation up to the discretion of the National Oceanic and Atmospheric Administration (NOAA).

Goldburg worries this could leave the door open for irresponsible deep-water aquaculture that might create pollution problems, perhaps similar to those seen from large-scale industrial hog-farming on land. (Hog farms have been linked to groundwater pollution, not to mention olfactory unpleasantness.) For example, a big enough fish farm in the Gulf of Mexico, where waters are already nitrogen-saturated, could cause problems.

Escapes present another area of concern. When the fatter, slower farmed salmon get loose, they can breed with threatened species of wild salmon. Goldburg says that's like breeding dogs and wolves. It pollutes the wild gene pool with much slower and dumber wild salmon that have trouble surviving and making it back up river to spawn.

That said, even Goldburg says that Neil Sims and the other top scientists and executives at Kona Blue are being environmentally responsible. The Kona Blue team is monitoring the sea water around their farm, and the company says it has found no discernable environmental impact. Goldburg notes that the company is also farming a species native to the area, and is not genetically altering or selectively breeding the fish in any way. So any escapes that occur won’t affect the surrounding wild species of fish.

There is one other potential problem. Right now, carnivorous fin fish such as salmon are fed a fish-meal made with wild-caught feed fish such as herring. Goldburg says it takes about three pounds of feed fish to raise one pound of salmon on a farm. She says that's not exactly a "sustainable" model, since farming fish relies on catching so many wild fish out of the oceans.

But Kona Blue's Sims says big strides have been made in replacing some of the fish in the fish meal with vegetable products. He expects the percentage of wild-caught fish in fish meal will fall sharply in years to come. And he's hopeful that more of the fish feed can be made with fish byproducts: heads, tails and trimmings which would otherwise go to waste.