Master Sgt. Luis Rodriguez, born and raised in Puerto Rico, became an Army medic and recently lost his leg in a roadside bomb attack in Mosul, Iraq. Eric Weiner speaks to Sgt. Rodriguez about his views on the war, and his own personal struggle to recover from his wounds. 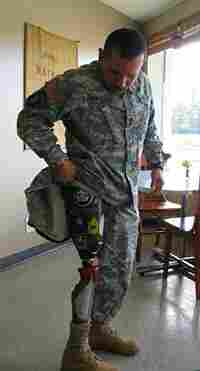 Master Sgt. Luis Rodriguez was a medic for the Army's 101st Airborne Division when he lost his leg to an IED attack. Eric Weiner, NPR hide caption

Since the war in Iraq began three years ago, more than 2,300 U.S. Troops have been killed. A less well-known figure is 17,000. That's the number of American Troops wounded in Iraq. Often, these men and women face years of painful recovery and an uncertain future. NPR's Eric Weiner has the story of one wounded soldier.

Some people deliberate long and hard before joining the armed forces. Luis Rodriguez, born and raised in Puerto Rico, deliberated for about five minutes.

Master Sargeant LUIS RODRIGUEZ (U.S. Army): My grandfather was in World War II. My father served 23 years, and then, of course, I kind of picked up from there.

WEINER: Rodriguez became an Army medic, drawn by his desire to help others, and by the fact that he doesn't flinch at the sight of blood.

In November 2003, Rodriguez was stationed in Mosul in Northern Iraq. One morning, he and several other medics were heading to a local hospital, checking out reports that children there were dying of leukemia. His convoy, though, didn't get far--only a few hundred yards--when an IED, a roadside bomb, exploded just three feet away.

Sgt. RODRIGUEZ: What I felt was somebody putting a metal bucket over my head, and hitting me with a baseball bat. The ring that stays there for a little while, that's what I felt right away. Right after that, there was sporadic fire. We started taking small-arm fire from the enemy. It was pretty tough. I was in pretty bad shape. One of the soldiers pulled me out of the truck and put a tourniquet, and I asked about my leg, and there was silence. And I got pissed off and I cursed out, I said where's my (censored) leg? And my first sergeant (inaudible), which is a guy that knows me for a long time, he said Rod, your leg is not there.

WEINER: Rodriguez was bleeding heavily. As a medic, he knew his life was in danger.

WEINER: Rodriguez, like most seriously wounded troops, then under went a circuitous journey: first to Baghdad, then to a U.S. Army base in Germany, and finally to Walter Reid Army Hospital in Maryland, where he spent four long months recovering.

WEINER: That's a point that Rodriguez makes over and over again. Whatever you do, do not feel sorry for him.

Sgt. RODRIGUEZ: I think that there is no better way, and I'm not saying that it's good for you to lose a limb, but there's no better way to lose a limb for soldier than in the middle of a fight, when you're trying to take the enemy. You go down doing what you like to do. The fact that, the day that I got hit, my guys were able to kill one of the enemy guys and wounded like three of them and captured a whole bunch of them. That made me feel good.

WEINER: Any reporter who's ever tried to illicit an opinion, any opinion, from an active duty soldier is often greeted with an old joke. If the Army wanted us to have an opinion, they would have issued us one. But Sergeant Rodriguez is not afraid to give his opinion. He has these words of advice for the nation's political leaders.

Sgt. RODRIGUEZ: You need to understand that having a military like the United States has is a gift. Do not abuse that. Use them wisely.

WEINER: Given the extent of his injuries, Master Sergeant Luis Rodriguez could retire from the Army with full disability. But he's decided to stay on. He teaches other combat medics at Fort Campbell in Kentucky. His students, he says, pay attention to his every word. Eric Weiner, NPR News.

Guardsman Carries on After Losing Arm in Iraq July 23, 2005
An Amputee's Long Walk Back to Flight Duty March 18, 2005
Soldier Adapts to Life With Prosthetic Limb March 10, 2005
Amputee Wounded in Iraq to Return to Active Duty March 4, 2005