Sgt. Michael J. Smith is found guilty on six of 13 counts of abusing prisoners at Abu Ghraib. Smith was the dog-handler in a photo of a black dog lunging for an orange-clad prisoner. Palm Beach Post reporter Susan Spencer Wendel talks with Melissa Block about the guilty verdict. 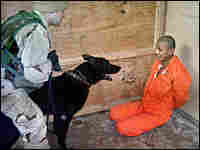 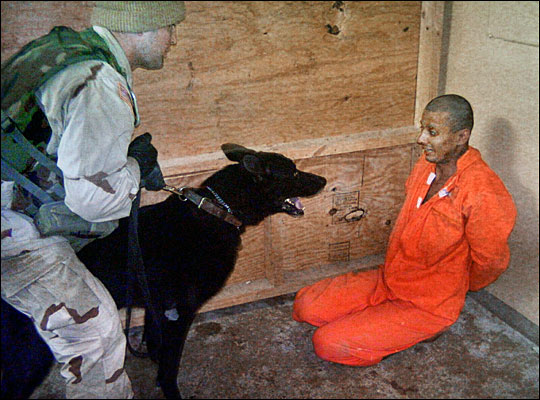 In this undated still photo, a U.S. soldier using a trained dog intimidates an Iraqi detainee at Abu Ghraib prison.

A military jury has found an Army dog handler guilty of abusing detainees at Abu Ghraib prison in Iraq. Sergeant Michael J. Smith was found guilty of six of 13 charges against him, which involved using his black Belgian shepherd to intimidate prisoners. The judge later dismissed one of the charges, saying it duplicated one of the others. The court martial is being held at Fort Meade in Maryland, and reporter Susan Spencer Wendel is there covering the trial for the Palm Beach Post. Sergeant Smith is from Fort Lauderdale. Susan, thanks for being with us.

BLOCK: And I think listeners will remember some photos that came out of Abu Ghraib showing, in fact, the handler and the dog in question. The dog is on a leash, very close to a detainee who's cowering on the ground. The dog's teeth are bared.

Ms. WENDEL: Indeed, Melissa. That was one of the most widely circulated photos around the world of Sergeant Smith and his dog, Marco, threatening a detainee in an orange-clad jumpsuit. That detainee, it came out during testimony at this court martial, was at the time believed to be an operative of al-Qaida. Sergeant Smith was convicted of charges pertaining to the acts in that photo, including maltreatment of that specific detainee.

BLOCK: And what else was Sergeant Smith convicted of?

Ms. WENDEL: He was also convicted of dereliction of duty related to not properly handling his military working dog. What the jury believed was the improper conduct there is not specified in the open court. He was also convicted of an indecent act he committed with other soldiers not upon detainees. And then, in addition, conspiracy to maltreat detainees. It was alleged in court that he and another dog handler had a game going, a bet, a joke, to see who could use their dogs to make the prisoners defecate or urinate first.

BLOCK: Sergeant Smith was also cleared of some of the charges against him.

Ms. WENDEL: He was, for acts depicted in other photographs. Listeners might recall photos, a naked man cowering in the hallway, the military dogs at his side barking at him. Sergeant Smith was acquitted of maltreatment of that particular detainee and some of the other specifications and charges that he faced.

Ms. WENDEL: Government prosecutors argued in front of the jury that Sergeant Smith was a rogue soldier, acting on his own, who used his dog in an irresponsible way. They called it a toy, a tool of terror, that he used upon detainees.

BLOCK: And for the defense side, was the defense that in fact higher-ups had approved exactly the techniques that Sergeant Smith was using?

BLOCK: And he testified under immunity. He will not be prosecuted.

Ms. WENDEL: That is correct. He testified under complete immunity. Defense attorneys for Sergeant Smith also sought to question Major General Jeffrey Miller, a key figure in the Abu Ghraib scandal. General Miller invoked his right to remain silent and not answer any questions. Defense attorneys later withdrew their request.

BLOCK: What about sentencing?

Ms. WENDEL: Sergeant Smith faces up to eight and a half years in prison for the variety of counts. The jurors will again have to deliberate what that sentence will be.

BLOCK: Do you think you got a clear picture at this court martial of whether in fact the use of dogs was accepted practice at Abu Ghraib for intimidating detainees?

Ms. WENDEL: Yes and no. Yes that, you know, people as high up as the colonel did authorize the use of dogs. But what exactly they authorized, muzzled, unmuzzled, how the spoken orders were then transmitted to other people, how the soldiers at the bottom interpreted them or acted upon the wishes of the officers is a little fuzzier.

BLOCK: Susan Spencer Wendel is a reporter for the Palm Beach Post. She's covering the court martial of Sergeant Michael Smith at Fort Meade, Maryland. The jury could return a sentence as early as tomorrow.