Accessibility links
Marah: Blue-Collar Heroes of Rock 'n' Roll Brothers Dave and Serge Bielanko of the band Marah talk about their music and its appeal to blue-collar listeners. The two formed the group in 1993 with a sound that's part country, part blues, part classic rock. They recently released their fifth studio album of original material, If You Didn't Laugh, You'd Cry.

Brothers Dave and Serge Bielanko of the band Marah talk about their music and its appeal to blue-collar listeners. The two formed the group in 1993 with a sound that's part country, part blues, part classic rock. They recently released their fifth studio album of original material, If You Didn't Laugh, You'd Cry. 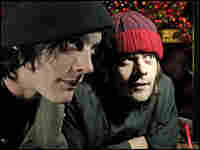 Do-it-yourself used to mean fix the leak in the kitchen sink. Now, with the wonders of technology, it can mean almost anything, including produce a music career. The band, Marah, that's led by the brothers, Dave and Serge Bielanko, recently visited our studios at NPR West. Here they are.

Mr. SERGE BIELANKO: We've made quite a bit of music above an auto garage in deep south, Philly, PA.

MARAH: (Singing) My heart is the bums in the street, with nothing to eat, and the dirty hands (unintelligible). My heart is the squirrels in the park, late summer evenings, dodging the rain drops.

Mr. SERGE BIELANKO: You know, most people associate Philadelphia with the film, Rocky, something like that, and Philadelphians have gladly embraced that, I think. There's a fighting spirit to the city. There's an underdog mentality from the sports teams to the unions to the bands that come out of there.

MARAH: (Singing) ...wander in this city, with its love and its life and its one slamming door.

Mr. SERGE BIELANKO: Marah is a band that wants more than anything to connect with the person on the street, and, for us, the way to start to do that was to write about the everyman.

Mr. DAVE BIELANKO: And that's one thing we've always strived for is the sense of place in music, where it feels like where it's coming from.

MARAH: (Singing) Got seven dollars to my name. Sixteen cigarettes, and somehow, I just ain't smoked yet. Just shoelaces and two shoes. I should toss them on the telephone wire, as a monument to my blues.

Mr. SERGE BIELANKO: You know, I've had guys in Green Bay, Wisconsin, come up to me and say hey, you know, I just want to tell you I love your show, and I got to leave because I got to go to work at the plant over on the lake at 4:30 in the morning. They're rooting for you. They're hoping you don't mess it up. They want you to do what they want you to do. But that's what happens, or least what happened to us--existing, sort of left of the music business.

Mr. DAVE BIELANKO: Five records at this point. Six, actually, I guess. We made a Christmas record, which I'm really proud of. But we've made five of our records on our own, pretty much, without the help of anyone. No producers or anything.

MARAH: (Singing) We're deperate in common, in spite of our names. Who (unintelligible) Christmas lights and candle flames.

Mr. DAVE BIELANKO: People have found a way to our band, and they did that by looking for it, and there's a connection that we can't be anything but super-proud of to have built on our own.

CHADWICK: Brothers Serge and Dave Bielanko are the leaders of the band, Marah. Their latest album is called If You Didn't Laugh, You'd Cry. That story was produced by DAY TO DAY's Rob Sachs.

MARAH: (Singing) We're running in circles, being in our place. Dreaming out our choruses and slow, sad middle aged. The tenure between us...

DAY TO DAY is a production of NPR News, with contributions from Slate.com. I'm Madeleine Brand.

More Music on 'Day to Day'