Accessibility links
Caregiver Role Brings Purpose -- and Risk -- to Kids More than a million kids provide care for a sick or disabled family member in the United States. Sickness and caregiving can rip open the rawest emotions between children and parents, but the experience can also make families stronger. 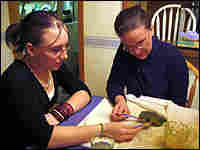 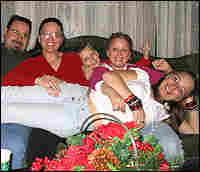 Ashleigh lies across her family's laps for a Christmas 2005 photo. Left to right, Mike Vanover, Valerie, and her children John, 8, and Elaina, 12. hide caption

Ashleigh Rehs does a lot of caregiving for her mother, who was diagnosed last year with multiple sclerosis. Ashleigh gives her a shot every night. And when her mother, Valerie Imdorf, needs infusions of steroids, she runs the steroids and solutions through the IV tubes. It's a process that takes two to three hours each night. Ashleigh is just 15.

Below, advocate Connie Siskowski talks about why young caregivers should have a formal system of support, and how her experience as a young girl caring for her grandfather guided her toward a career in health care.

It turns out that a lot of kids are caregivers for parents and other family members. A survey last year found that at least 1.4 million children between the ages of 8 and 18 provide care. One-third of them help with medications. Nearly two-thirds say they help someone eat, get in and out of bed, get dressed, take a bath or go to the bathroom. That study was conducted by the National Alliance for Caregiving and the United Hospital Fund.

And while caregiving is generally a task that falls to females, among child caregivers there's a different pattern: Half are girls and half are boys.

In the year since Imdorf's diagnosis, Ashleigh has had take on a lot of household responsibilities as well as providing care for her mother.

Ashleigh, who lives in Cuyahoga Falls, Ohio with her mother and her younger brother and sister, says the experience has changed her life, and in some ways for the better. Now she says she wants to go to medical school and discover a cure for MS. That's a big difference from before her mother was diagnosed.

"If you met me a year and a half ago, I would of probably told you I don't want to be anything. I might as well be nothing. I was at a state I didn't care about life," she says.

"Once I found out that [my mother] had MS, that actually turned me around because I saw the effects of what it could do. When I see that, it's like OK, I need to be here."

Support groups for children who care for a sick or disabled family member are practically nonexistent in the United States. Connie Siskowski is a nurse and director of a new advocacy organization looking to build a support system for young caregivers. It's called the American Association of Caregiving Youth.

Siskowski speaks from personal experience. As young girl, she helped care for her grandfather and sometimes helped with his medication. One night, hours after a switch to a new heart drug, he was found dead. For a time, Siskowski says she felt partly responsible.

Here, she talks about what's needed to help kids in a similar situation, and why:

Q: Is it good or bad for a child to be a caregiver?

Tough question. I think it can go either way. They certainly miss a lot of their childhood, but at the same time, they're learning some life skills. I know a lot of people in the health-care profession who are there because of some family-caring experience, and that's a good thing. But on the other hand, if they're in a situation in which they're way over their head and have too much stress, it's not good.

Q: Are these children put at risk because of the caregiving they do?

If it's not done properly, sure. If they miss school, if they're not able to do their homework, they may not graduate. There was a new report that just came out, conducted by Civic Enterprises, that looked at young adults who had dropped out of school. They're now between the ages of 18 and 25. And 22 percent of them reported they dropped out because of caring for a family member.

Q: Did your experience with your grandfather play a role in your decision to become a nurse?

Probably, because I loved him so much. And as his health deteriorated, I would do things for him, I would bring him his urinal, help him get dressed, and it really was my privilege to do that.

Q: How old where you when he died?

Thirteen. A doctor visited our home and started him on a new medication. I don't know exactly why I was giving him his medicine, except that I was probably closest to him in our household, and I slept in the living room to be closer in case he needed anything. But I got up to feed him a pill at 2 in the morning, and I found him dead. And I still can feel what his skin felt like and the loss, but I'm also blessed to have had that close, close relationship with him.

Q: So that was the first time you were supposed to give him that medicine, right?

It was a new schedule. Retrospectively, he was probably starting on digitalis, so he had two of the doses, and at that time, the way the medications were, you had to give it every four hours. So he had it at 10 and the next time was 2. I woke up and it was one minute after 2 and I went to him and his skin was cool.

Q: That's a pretty heavy thing for a 13-year-old. Did you feel guilty in some way?

Nobody recognized it at the time, but I'm sure that I did feel guilty, absolutely. But it wasn't one of those things that was talked about or addressed and I just went on to prepare for his funeral.

Once I became a nurse -- once I recognized all the things involved, that he had congestive heart failure, he was 86, he had a wonderful life -- I knew that what happened was OK. So you get through that. But who had information then? Not me, not my family, and that's a reason why it's really important for children to understand and be supported. I never went to any grief program.

Q: Would you have benefited?

Q: So kids are on their own?

Kids have been on their own, and that's why we are so in need of resources and support, and the opportunities to work with others to provide resources, locally, as well as nationally, so that these children don't have to be alone.

Q: When we say support, what are we talking about?

We think that there should be support groups for children, basing our model on what's been done in the U.K. For instance, children are identified as young caregivers and they have a special card, so that if they're sitting in school and worried about what's going on at home, they have the opportunity to go make a phone call and check, and then their stress can be alleviated.

We want to do a lunch and learn. It's a support group during lunchtime so that they can meet other children with whom they might be able to discuss what's going on with them. There are probably many situations that are equivalent to what one child is going through, but because nobody talks about it, they are just not aware of it.

I believe that kids need respite, just like adults do. They need a break. Many of the young carers who we met from Australia at a recent conference, the kids had met at camp, and to have children have the opportunity to be at a camp, to have a good time, to not have these responsibilities that may be well beyond their years, to just give them a break is very uplifting and valuable for them.

Q: If you could wave a wand, what would exist tomorrow?