Accessibility links
Basque Group Announces Permanent Truce The Basque separatist group, ETA, announces a permanent cease-fire as of Friday. A statement announcing the cease-fire was sent to television and newspaper outlets. If it holds, it could bring a dramatic end to a decades-long campaign of violence.

The Basque separatist group, ETA, announces a permanent cease-fire as of Friday. A statement announcing the cease-fire was sent to television and newspaper outlets. If it holds, it could bring a dramatic end to a decades-long campaign of violence. 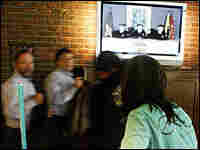 A person watches a video in which pro-independence Basque group ETA declares a permanent cease-fire at a pub in the northern Spanish Basque city of Vitoria on March 22, 2006. Credit: Rafa Rivas/AFP/Getty Images/Getty hide caption 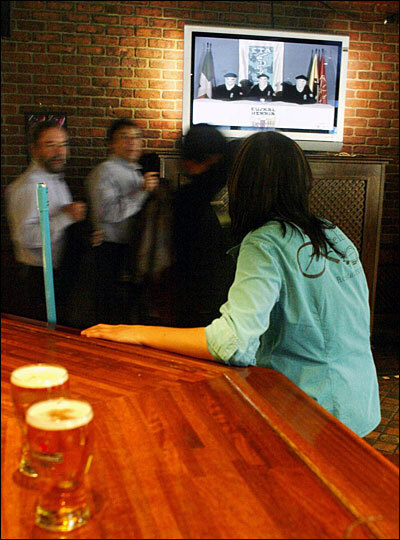 A person watches a video in which pro-independence Basque group ETA declares a permanent cease-fire at a pub in the northern Spanish Basque city of Vitoria on March 22, 2006.

After nearly four decades of violence, the Basque separatist group ETA, has announced a permanent cease-fire in Spain. ETA has killed more than 800 people in its campaign to win independence for the northern Basque region. Today's announcement met with a mixture of skepticism and hopeful caution.

At first it looked like one of the usual videos that ETA has issued to justify its terrorist attacks. Three figures appeared wearing white masks and black berets. They sat under the group's insignia, a serpent coiled around a hatchet. But this time, it was a different message from ETA, whose name stands for Euskadi Ta Azkatasuna, or Basque Homeland and Liberty.

Unidentified Woman: (Through translator) Basque Homeland and Liberty has decided to declare a permanent cease-fire as of March 24th, 2006.

SOCOLOVSKY: That means that this Friday would mark the end to a violent campaign for Basque independence that began in the 1960's. At first, many people saw Euskadi Ta Azkatasuna as a resistance group. One of its early victims was Admiral Carrero Blanco, the man who was supposed to succeed Franco, the Dictator.

But despite Spain's return to democracy back in the 1970's, and the self-rule given to the Basques, ETA has persisted with violence. Car bombs and assassinations have killed Spanish police, politicians, judges and journalists, 817 people in all. Leaders of the ruling socialist party called the cease-fire announcement good news.

Prime Minister JOSE LUIS RODRIGUEZ ZAPATERO (Spain): (Through translator) The government will tackle the new situation with prudence and calm, knowing that after so many years of suffering we shall have a long and difficult road ahead of us.

SOCOLOVSKY: The Prime Minister appeared to have seen it coming. He asked parliament last year to give a green light to negotiations with ETA, if the group renounced violence.

However, opposition leaders are warning that ETA has declared truces before, most recently in 1998, only to regroup and resume violence. Mariano Rajoy, the leader of the conservative Popular Party, pointed out that ETA has neither apologized nor expressed regret for any of its killings. He had this to say about negotiating with ETA.

Mr. MARIANO RAJOY (leader of the Popular Party, Spain): (Through translator) No political price whatsoever may be paid to terrorism, because that would convert terrorism into a political instrument and the terrorists will have won.

SOCOLOVSKY: Rajoy's party fears that price could be Spanish territorial unity. ETA's announcement came a day after the Sabatero government promised to give another region, Catalonia, more self-rule, and recognize it as a nationality. But no such promises have been made to the Basques. Observers have noted that ETA has been debilitated by waves of arrests and the outlawing of Batasuna, a Political Party linked to ETA.

Juan Jose Barachia (ph), the President of the Basque region's Self Rule Authority, said the group has finally faced reality.

SOCOLOVSKY: At long last, he said, ETA has listened to the Basque people.