Accessibility links
Exhibit Depicts Theatrical Side of Forensic Science The scientific method is but a part of building a murder case; a National Library of Medicine exhibit stresses the impact of "visible proof" on judges and juries... and details how tools of forensic science became the bedrock of detective work.

Only Available in Archive Formats.
Exhibit Depicts Theatrical Side of Forensic Science

Gumshoe detectives and crusading cops, move over and make room for the scientist.

Forensic science -- the application of science to legal questions -- is a big hit on television these days. Forensics experts weren't always so popular with the public, though. In Europe, they were the ones who arrived on the crime scene to confiscate the wrongdoer's property for the king or the "crown," thus the name coroner.

A new exhibit, Visible Proofs: Forensic Views of the Body, at the National Library of Medicine in Bethesda, Md., tracks the history of forensics from medieval murders to 20th-century genocide. The exhibit tells the story of the transformation of a science.

The exhibit shows there's more to forensics than guns and gore. The poisoner's arsenal grew during the Industrial Revolution, when many new chemicals were invented. The rise of big cities and urban crime led the French to invent a system of recording body measurements of criminals so police could track them. That was soon eclipsed by a British discovery -- fingerprints.

New technologies continued to produce new kinds of evidence for prosecutors, and the apparent objectivity of technology -- true or not -- helped sway juries.

"There is always a theatrical element in forensics, and that's one of the themes of the show -- visible proofs. It's the idea that it's not enough to make a proof that's persuasive in an argument, you have to show it," says curator Michael Sappol. 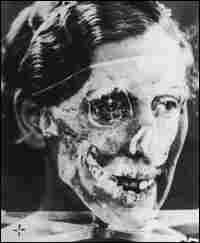 After murdering his wife, Isabella, in 1935, Dr. Buck Ruxton dismembered her and scattered the remains. Police recovered the body parts and forensic scientists then reconstructed her skull, matching it to her photo. University of Glasgow hide caption

'Visible Proofs' Exhibit at the National Library of Medicine