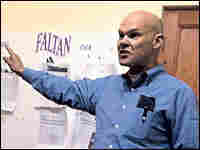 The documentary Our Brand is Crisis looks at the work of American consulting firm Greenberg Carville Shrum and its role in Bolivia's 2002 presidential election. The firm helped Gonzalo Sanchez de Lozada, aka Goni, win the presidency -- although he was forced to resign in 2003 amid widespread protests. The director of the film, Rachel Boynton, talks with Robert Siegel about Our Brand Is Crisis and U.S. consultants' use of branding to promote "democracy" overseas.

'Our Brand Is Crisis' Site