Accessibility links
Fact-Checking the White House on Iraq President Bush and other administration officials are making the rounds in an all-out effort to convince a wary American public that in fact, progress is being made in Iraq. Which statements are true, and which are false? 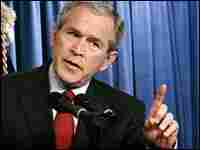 Throughout this week, President Bush and other administration officials have delivered speeches, held news conferences and appeared on network television political roundtable shows -- all in an effort to convince a wary American public that in fact, progress is being made in Iraq. Which statements are true, and which are false? And which lie somewhere in between? Here is our brief guide for the bewildered:

The 'Last Throes' of the Insurgency

"The level of activity that we see today from a military standpoint, I think, will clearly decline. I think they're in the last throes, if you will, of the insurgency."

False -- Asked about this comment this past Sunday, Cheney said it "reflected reality." But by almost any measure -- attacks per day, casualties, etc. -- the insurgency shows no sign of waning.

"Remember, they [Japan] attacked us, too. And yet today, the president says we're going to keep the peace. And what happened? It's an interesting lesson that I hope people remember. Something happened. What happened was Japan adopted a Japanese-style democracy."

True -- Japan, once a sworn enemy of the United States, is now one of its closest allies.

Japan, unlike Iraq, is a homogenous society with hardly any ethnic tension. And in Japan, the U.S. occupation forces never dismantled the local police.

True -- The number of Iraqi troops being trained is on the rise.

The number of "battle-ready" Iraqi troops is still inadequate -- the Iraqi forces depend heavily on U.S. troops. In addition, the Iraqi security forces have been infiltrated by members of various militia.

"The Iraqis have met every single political deadline that's been set for them. They haven't missed a single one."

Basically true -- With only a bit of fudging, Iraq has indeed met its political deadlines.

These political milestones have not yet borne fruit. So while elections have been held, those elected have yet to form a government. And while a constitution has been written, it has yet to take effect.

"I don't think we ever said -- at least I know I didn't say -- that there was a direct connection between September the 11th and Saddam Hussein."

President Bush has called Iraq "an ally of al-Qaida" and often speaks of the war in Iraq being part of the military effort his administration calls the "global war on terror."