Accessibility links
Making Bacon That's Healthier for You If you think scientists never do anything useful, consider this: A team of researchers may have found a way to make bacon that's good for your heart. This stunning achievement comes from a mixture of molecular genetics, cloning, and good old American know-how. 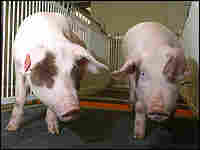 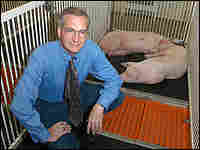 If you think scientists never do anything useful, consider this: A team of researchers may have found a way to make bacon that's good for your heart. This stunning achievement comes from a mixture of molecular genetics, cloning, and good old American know-how.

The key to this delicious prospect? A modified gene that changes some of the omega-6 fatty acids -- which pigs normally create -- into omega-3 fatty acids.

Omega 3 is the healthy fat you get in oily fish and flax seed. It's generally thought that a diet high in omega-3 fatty acids helps prevent heart disease.

The first animals to get this gene were mice. Like all mammals, mice make mostly omega-6 fatty acids. But Jing Kang, a scientist at Massachusetts General Hospital in Boston, found that mice who got this gene converted significant amounts of their omega-6 fatty acids into healthy omega 3s.

When University of Pittsburgh scientist Yifan Dai learned about Kang's work, he immediately sought to make it work in bigger animals. The idea of rewriting the rules of a healthy diet appealed to him. "I realized we wouldn't need to only eat fish any more," he says. If the gene worked, "we can eat livestock, pork or maybe beef."

Dai decided to start with pigs, and put the modified gene into pig cells in his lab at Pittsburgh. But to get the gene into real live porkers, he turned to Randall Prather of the pig cloning center at the University of Missouri. Prather also liked the idea of a healthy breakfast: "I would like to get up in the morning and have some omega-3 bacon that was good for me," he says.

Prather's team took Dai's pig cells containing the modified gene and used traditional cloning techniques to transform these cells into embryos that would grow into healthy baby pigs. They took normal pig eggs, removed their DNA and replaced it with a Pittsburgh pig cell.

As soon as the eggs started dividing like normal fertilized eggs, the team put them back into pig mothers. Three months, three weeks and three days after transferring these embryos -- the normal time for pig gestation -- five litters of cloned piglets were born.

As Dai and Prather had hoped, these modified piglets had much more omega -3 fatty acids than normal pigs. And one particular piglet, Piglet 4, had particularly high levels. Unfortunately, he also had a heart condition, which meant he wouldn't live long enough to breed.

Prather decided to clone Piglet 4, and last November, a litter of Piglet 4 clones was born. These five piglets will form the basis of a breeding herd of pigs that make high levels of omega-3 fatty acids.

Unfortunately, this does not mean that heart-healthy bacon will be on supermarket shelves any time soon. Bob Wall of the U.S. Department of Agriculture's Animal Research Service cautions that it's too early to say if these animals will grow into adult pigs that have the right kinds of fat, in the right kinds of places.

And the Food and Drug Administration will want to take a good, long look at these pigs to be sure they're safe to eat. It will also take at a few years to breed enough of these pigs to bring them to the market.

Bacon doesn't have a very good reputation when it comes to a healthy diet. But now, scientists are aiming to make bringing home the bacon -- and some other fatty meats -- a little healthier. In the current issue of the journal Nature Biotechnology, a team of scientists reports they've genetically engineered pigs to produce higher levels of omega-3 fatty acids -- a kind of fat believed to reduce the risk of heart disease.

What is omega-3 fat?

Omega-3 fatty acids are a kind of polyunsaturated fat found in certain fish and plants. Your body doesn't make omega 3, so you have to eat it. Omega 3 comes in three forms, known as DHA, EPA and ALA. Scientists have been most interested in the potentially beneficial effects of combinations of DHA and EPA. In general, the standard American diet is thought to contain too little omega-3 fat, relative to another type called omega 6.

Why is omega 3 believed to be "heart friendly"?

Several decades ago, researchers noticed that people living in the Arctic who had diets rich in omega 3 also had low rates of heart disease. Since then, several large studies have found more evidence of a link, according to the American Heart Association (AHA). Studies have also suggested that people at risk for coronary-heart disease benefit from consuming omega-3. One prominent theory is that the fat reduces the inflammation of tissues that are linked to heart disease.

What foods contain this "good" fat?

Fatty fish like mackerel, lake trout, herring, sardines, albacore tuna and salmon are high in omega 3s. Tofu and oils made from canola, walnut and flaxseed are also good sources. You can also buy omega-3 supplements.

It isn't clear how much omega 3 you need to ingest to get benefits, according to the AHA, although it recommends eating two fatty fish meals a week. It also warns that ingesting too much of an omega-3 supplement can lead to health problems, such as excessive bleeding.

Are scientists trying to engineer other animals to produce omega 3?

Yes. In 2004, researchers at Massachusetts's General Hospital reported engineering a worm gene that successfully produced levels of omega 3 when transferred to mice. And scientists are investigating other methods for engineering larger animals, such as cows and chickens, so they can make meat, eggs, and milk rich in omega 3. -- Reporting by Meagan White, Allison Aubrey and David Malakoff