Accessibility links
Wind Farms Draw Mixed Response in Appalachia Huge windmills -- promoted as a source of clean, renewable power -- are sprouting up on mountaintops in the Appalachian states. But some local opponents say the tall turbines blight the rural landscape. 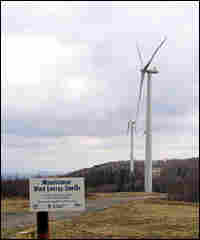 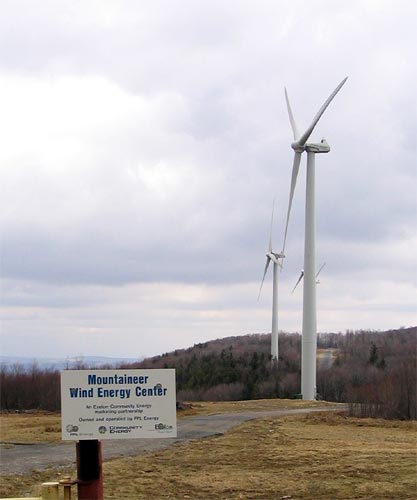 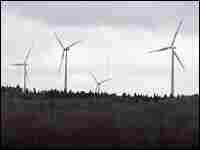 Rural Tucker County, W.Va., has 44 mountaintop windmills. They're tall enough that their rotating blades can be seen for miles, and loud enough that their whooshing sound is heard in the nearby hollows. Adam Hochberg, NPR hide caption

Note: The sound was recorded from about 400 feet away.

Listen to a turbine

The Appalachian states lead the nation in underground coal production, but now there's an effort to harness another type of energy there. Huge windmills are sprouting up on mountaintops from western New York through Pennsylvania and West Virginia. The futuristic machines are promoted as a source of clean, renewable power. But they're often not welcomed by locals, who say they blight the rural landscape.

With just 2,400 residents, Highland County, Va., is the least populous county in the eastern United States. But Tal McBride envisions the area as a leader in America's quest for renewable energy. He wants to build 19 high-tech windmills -- white metal turbines as tall as 400 feet -- designed to harvest the gusts that roll across his mountain farm.

McBride says his farm is blustery enough to power about 20,000 homes. That may not be a lot in and of itself. But McBride's wind project is one of more than a half-dozen proposed for Appalachian hilltops from Pennsylvania to Virginia. It's part of a wind development boom sparked by generous tax subsidies and a growing interest in renewable power.

"This can't be the sole answer to challenges of climate change, but it can be a piece of the puzzle," says Frank Maisano, an energy industry spokesman, who's been promoting wind farms on the East Coast. "And if you have a renewable resource here that is non-polluting, has no emissions, it's a win, win, win for the environment, for the county itself, and for addressing some of the challenges that we as the United States face."

But before wind developers can take on those national challenges, they have to overcome some challenges closer to home.

Richardson predicts the windmills will hurt tourism -- which is just about the only industry in Highland County. And Shawna Bratton -- whose family owns 900 acres near the proposed wind farm -- worries about its effect on property values.

Similar opposition has surfaced in other East Coast towns where wind farms are proposed. West Virginia residents have filed a nuisance suit to block construction of one wind project, while opponents of turbines off the coast of Cape Cod are hoping for congressional intervention to stop them.

Even the environmental community is divided over wind farms. Some groups -- like the Virginia Audubon Council -- oppose them because of the threat to bats and birds. Others -- such as Environmental Defense -- support them, arguing wind power harms the planet far less than fossil fuels do. One thing most environmentalists agree on is the need for better standards about where the big windmills should be built, both to limit their impact on local communities and help prevent more disputes over the future Appalachian skyline.