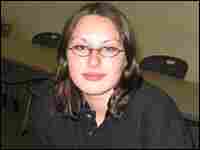 C.C. Cretarolo, 17, is enrolled in the Gateway to College program in Portland. She hopes to get her high-school diploma within two years. Neva Grant, NPR hide caption 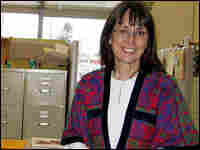 The Cost of Dropping Out

Dropping out of high school can result in long-term financial losses not just for the individual, but for society as a whole. Scroll down to read more.

The program, called Gateway to College, is taught at Portland Community College. The idea is that students who enroll will get a taste -- even a thirst -- for college by taking classes on a college campus.

Some of the teens in the class are helping to support their families at home. They may become the first in their families to go to college. And many also have this in common: They hated high school.

Hear Part 1 in This Series

The Gateway program screens for students who have the skills and motivation to try their hand at school again. It also offers things that most high schools can't: Small classes and a lot of counseling. Tuition is free. And it allows students to earn high school and college credit for every class they take.

There are many programs like Gateway to College across the country. The Bill and Melinda Gates foundation is spending millions of dollars to launch more like the one in Portland. It's too early to know how many students graduate nationally. But in Portland, the program demands a lot of students who already have demanding lives; 40 percent of them drop out. Many do come back for their high-school diplomas, a big accomplishment considering where they started. But the title of this program is Gateway to College -- and so far, few students have gone on to earn that next degree.

The Cost of Dropping Out 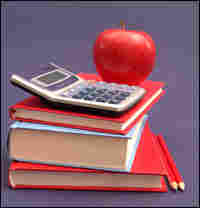 Over time, the cost of dropping out of high school can add up significantly for the individual and for society. Photo: Karolina Paszkiewicz hide caption

Does going to school pay off? In 2004, 22 percent of 18-to-24-year-olds in the United States had not completed high school, according to the National Center for Education Statistics. The U.S. Census Bureau estimates that the average annual income for individuals without a high school diploma or GED is $18,734. Compared to 1971, when average earnings were $35,087, today's dropouts face a bleak economic future. Educational attainment levels are usually mapped against earning potential to illustrate the point that more learning leads to more earning. But this measurement often ignores the broader costs to society of high-school dropouts.

- 75 percent of state prison inmates and 59 percent of federal inmates are high-school dropouts.

- High-school dropouts are 3.5 times more likely than graduates to be incarcerated.

- Dropouts contribute disproportionately to the unemployment rate. In 2001, 55 percent of young adult dropouts were employed, compared to 74 percent of high-school graduates and 87 percent of college graduates.

- Dropouts contribute to state and federal tax coffers at about one-half the rate of high-school graduates. Over a working lifetime, a dropout will contribute about $60,000 less.

- Studies suggest the United States would save $41.8 billion in health care costs if the 600,000 young people who dropped out in 2004 were to complete one additional year of education.

- If 33 percent of dropouts graduated from high school, the federal government would save $10.8 billion each year in food stamps, housing assistance, and temporary assistance for needy families.