Accessibility links
Q&A: Inside the Immigration Debate The Senate Judiciary Committee has approved a plan that would give the nearly 12 million undocumented workers now living in the United States a path to citizenship. The debate now moves to the full Senate. NPR's Jennifer Ludden helps explain the politics and policies involved.

Q&A: Inside the Immigration Debate

Q&A: Inside the Immigration Debate 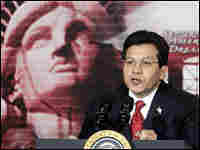 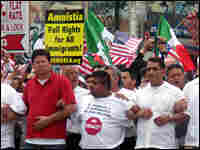 Marchers in downtown Los Angeles protest efforts to make it a felony to live in the United States without authorization, March 25, 2006. Carrie Kahn, NPR hide caption

Immigration policy was a major focus of President Bush's agenda when he began his first term in office in 2001. His plan centered around the creation of a guest worker program for foreign workers. Then came 9/11. In the wake of the terrorism attacks, the discourse shifted, from providing paths to citizenship for those already in the country illegally to strengthening borders in the name of national security.

The Op-Eds Weigh In:

The debate over illegal immigration is a complex, often emotional one that elicits a range of opinion. Read a sampling of op-eds and editorials from across the nation.

Now, in a midterm election year, the issue has returned to prominence on Capitol Hill. The Senate Judiciary Committee has approved, on a 12-to-6 vote, a plan that would allow illegal immigrants to earn citizenship, while also tightening border security and enforcing existing bans on the hiring of undocumented workers. The legislation now moves to the full Senate, where it will be debated by Republicans deeply divided on the issue. The bill also differs sharply from tough border-security legislation passed by the House in December 2005.

Q: What factors are bringing immigration reform back to the forefront of the legislative agenda now?

If you ask lawmakers on Capitol Hill, they'll say their constituents back home bring up the issue repeatedly. Opponents of illegal immigration argue that the undocumented are taking American jobs, draining state coffers and eroding U.S. culture. Immigration doesn't top the list of worries on the minds of most voters, but polls show it to be of significant concern -- enough so that politicians feel they can't avoid taking a position.

The border-watching Minutemen have also helped raise the issue's profile. This group of mainly middle-aged men (and some women) are now staging their second annual stakeout at the Arizona border, with the aim of stopping illegal immigrants from entering from Mexico. President Bush, among many others, originally dismissed the group as "vigilantes." But instead of going away, they've spawned affiliates across the country. Much of what the Minutemen do is certainly a show for the media, and it's not clear they've had any concrete effect on the ground. Yet even critics concede the group has had a political impact by rallying grassroots support, including in places far from the border.

Q: What are the main issues involved in the immigration debate?

The sticking point has been a guest worker program. The idea has taken many forms: As first outlined by President Bush, such a program would allow foreigners outside the United States to apply for temporary work visas. Other plans would also give the millions of undocumented immigrants already in the country the right to stay legally. The issue has created a rift among Republicans. While business interests in the GOP seek to legalize workers, the party's conservative base is strongly opposed to illegal immigration.

Critics argue that the government should first focus on border security. Some want to make it a criminal offense -- punishable by jail time -- for the undocumented to live in the United States (right now, it's a civil offense). Legislation passed by the U.S. House in December does indeed make this a felony. The plan approved by the Senate Judiciary Committee eliminates these criminal provisions, and it also drops all criminal penalties for those who provide assistance to undocumented foreigners, except for those involved in smuggling.

However, that House bill skirted the guest worker controversy by focusing exclusively on border security. There's a widespread feeling that toughening enforcement will play well in this fall's midterm elections, although some question that. Some polls actually show a majority of Americans support a guest worker program -- if participants are made to "pay" in some way for having broken the law.

Q: How does the Senate's plan compare to legislation passed by the House?

In terms of border security, the Senate Judiciary Committee has approved a lot of the same measures the House passed: more high-technology monitoring equipment at the border, tougher anti-smuggling laws and more border patrol agents. Sen. Jon Kyl (R-AZ) got the committee to include expanded double and triple fencing along much of Arizona's border with Mexico, similar to what's already in place near San Diego. But the committee declined to approve a barrier along hundreds of miles of border, as the House bill does, opting instead to study the idea.

The Senate bill, like the House bill, would force employers to take part in a national computer system to verify that employees are documented.

Unlike the House bill, the Senate legislation would greatly increase the number of green cards available each year. It's an attempt to plough through the years' long backlog for those trying to immigrate here legally. To cite just one example, some people in the Philippines face a two-decade wait to join family members in the United States.

The major points of contention, though, are over the Senate Judiciary Committee's proposed guest worker program, and its proposal to legalize the nearly 12 million undocumented immigrants in the country now.

Q: : What's the controversy over the guest worker program in the Senate bill?

The Senate panel approved a plan from Senators John McCain (R-AZ) and Edward Kennedy (D-MA) to create a guest worker program for up to 400,000 foreign workers. There would be some sort of computerized registry to match them up with U.S. businesses, and those companies would have to show that they could not find an American to do the same job. Participants in the guest worker program would have to work for six years before they could apply for permanent residency (a so-called green card). They'd have to wait another five years to apply for citizenship.

Supporters say allowing guest workers to earn citizenship is necessary to avoid creating a permanent underclass, with no political rights, that is vulnerable to exploitation and depressed wages.

Q: What about legalizing those undocumented immigrants already here?

This is probably the most contentious part of the Senate Judiciary Committee's plan. The bill passed by that panel would allow the nearly 12 million illegal immigrants estimated to live in the nation now to become citizens eventually. Supporters argue that these proposals do not amount to amnesty because to qualify, immigrants would have to pay a fine, learn English, hold a job, pass a criminal background check and pay any back taxes. As Sen. Lindsey Graham, Republican of South Carolina, quipped: "That probably excludes half my family!"

Opponents say the plan rewards illegal immigrants for breaking the law. Some worry that it would allow those who came to the United States illegally to jump in line ahead of about 3 million people already waiting for permanent visas. Sen. Kennedy insists that will not occur. Still, Arizona Republican Jon Kyl is among critics who say the plan is "not fair to those who've been playing by the rules."

Q: Is the immigration proposal likely to pass in the full Senate?

It's hard to say. Certainly, the Senate is a much different body than the House, and many members feel strongly that while a border crackdown is needed, that alone will not solve the problem. They point to mounting security measures over the past decade, and note that the number of illegal migrants each year has only increased. However, if a bill focusing only on border security did come up for a vote in the Senate, it might be hard even for Democrats to vote no. Imagine the campaign commercials against a senator who'd voted against tighter security.

Q: What about reconciling the House and Senate plans?

If the Senate does end up passing a guest worker program, this may be the hardest task of all, and there aren't many optimists out there. Immigration reform has become a bit like the Mideast peace process -- it's a safe bet that nothing will happen. So -- one wonders -- is all this anguish and debate for naught?

I once looked back at the 1986 bill that legalized nearly 3 million immigrants; it took about five years to get it through Congress. By my count today, we're in year three. But, ironically, the fallout from that 1986 legislation may make it even harder to pass immigration reform today. Critics like to ask, "What do you get when you amnesty 3 million undocumented immigrants? Their answer: "Four times as many illegal immigrants, two decades later."

One large reason is that, while the 1986 law made it a crime to employ an undocumented worker, the provision has never been strictly enforced. That is something both bodies of Congress are trying to address. So, if the divide over legalization and guest workers can be bridged, remember to look closely at what provisions there are for businesses to check the legal status of their employees. That will say a lot about how any new immigration overhaul will play out.

Illegal Immigrant: Someone present in the country without authorization. People considered illegal immigrants can enter the United States in two ways: either by sneaking across the border, or by entering the country legally under a temporary visa but then failing to leave once their visa expires.

Legal Implications: Living in the United States illegally — either by sneaking in or by overstaying a visa — is a violation under the civil code, not the criminal code. However, illegal immigrants can be incarcerated as part of the deportation process. Sneaking across the border is currently a criminal misdemeanor that can result in six months in prison. Immigration legislation passed by the U.S. House in December would make it a felony to live in the United States without authorization.

Guest Worker Program: A program that allows foreign workers a legal means to work and live in the United States for a temporary period of time.

U.S. law currently includes provisions that allow people to enter the country temporarily to take up work in agricultural and professional sectors of the economy. Most have set ceilings on the number of foreign workers who can be allowed in. U.S. businesses have long bumped up against these ceilings.

Source: David Martin, professor of law at the University of Virginia. He formerly served as a general counsel at the federal agency now known as U.S. Citizenship and Immigration Services.