Accessibility links
'Congotronics' Electrifies Traditional African Music A CD series called Congotronics showcases urban traditional bands in Kinshasa, Congo. The first Congotronics CD was a hit in Europe and the United States, especially popular with DJs who work the music into their club mixes. Now, Congotronics 2 is being released.

A CD series called Congotronics showcases urban traditional bands in Kinshasa, Congo. The first Congotronics CD was a hit in Europe and the United States, especially popular with DJs who work the music into their club mixes. Now, Congotronics 2 is being released. 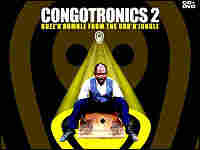 Take traditional African instruments, electrify them and set them to a dance beat that resembles club music, electronica or trance. You've got Congotronics. It's the name of a CD series that showcases bands in Kinshasa, the capital of The Democratic Republic of the Congo. The first disc was a hit in Europe and the U.S., and DJs worked it into their mixes. Now comes a CD/DVD package. Banning Eyre has a review of Congotronics 2.

The six groups featured on Congotronics 2 were not stage managed, sampled, remixed or even taken into a recording studio to make this record. What you hear here is essentially found art, and there's no doubt that's part of the appeal.

EYRE: That's Kisansi Congo performing in a deserted shopping mall in Kinshasa. Those clanging psychedelic sounds are created by iron pronged thumb pianos called lacembes(ph). Groups like this had their heyday in the early seventies. Then President Mobutu Sese Seko was pushing his authenticity campaign. He paid village groups to come to the city where they plugged into guitar amplifiers and played at government functions. This group, Bolio Endenge(ph) was formed in the Congolese Interior at the site of a notorious Belgium labor camp.

Most of these groups literally play music for the dead. People used to hire them for funeral services to ease spirits into the next world. Congotronics producer Vincent Kenis encountered such performances in the Congo in 1971 and was blown away. But by the time he went back, hoping to record groups like this in the late eighties, Mobutu was gone, Christian Evangelists had cornered the funeral music market, and Kinshasa was full of slick guitar bands playing amorous pop music.

The urban traditional groups Kenis was looking for were either disbanded, turned to the bush, or tucked away in remote neighborhoods of the city. It took until the year 2000 for him to find some of them and at last start recording. In some cases, village music had merged with local guitar pop to create still new hybrids. Like this one by Kasai All Stars.

Congotronics is a remarkable story about how rural musicians marginalized in the big city they've made home, suddenly become a hot item on the international world music circuit. Congo has one of Africa's most developed pop music industries. And believe me, the success of Congotronics has plenty of Kinshasa producers scratching their heads. Well never mind, this music is grooving, seductive, raw and genuine. And apparently after so many polished crossover projects and celebrity star turns in the world music hinterlands, that, dare I use the word, authenticity, really hits the spot.

BLOCK: Banning Eyre reviewed Congotronics 2: Buzz and Rumble from the Urban Jungle. This is ALL THINGS CONSIDERED.